Xiaomi Mi Box S now replaces Xiaomi Mi Box 3. The difference between the new S version is almost trivial, and the TV box is not an upgraded version of its predecessor. Xiaomi has not changed much on the Mi TV Box 3. Mi TV Box S has undergone some changes in design and Android 8.1. Now also includes the new Bluetooth standard 4.2 (not the latest) and Chromecast Ultra. So what are the similarities and differences between Mi Box S and Mi Box 3? 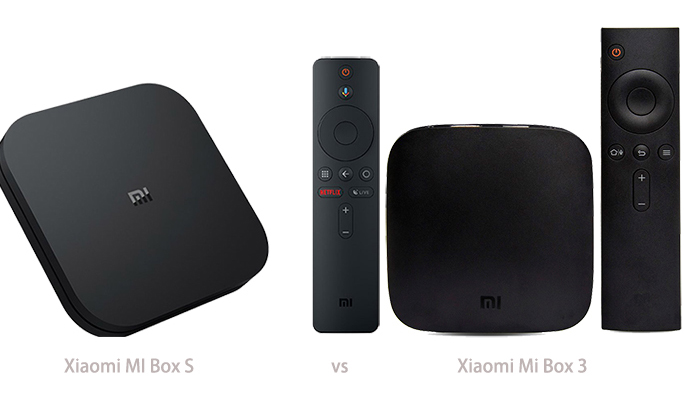 The Xiaomi Box S has the latest version of Android TV, 8.1, and may eventually be upgraded to 9. Xiaomi Box 3 has a previous version of Android TV, 8.0. The Android operating system makes it easier for users who are used to operating systems . The Mi Box S and Mi Box 3 both run stock versions of Google's Android TV operating system. The Stock version is the default operating system provided by the manufacturer without any modifications. Some manufacturers run their own versions of user interfaces. It also helps prevent bloatware. Bloatware is software that uses a lot of memory and has unnecessary features. Despite being cast to the same specifications, the Mi Box S still performs better when compared to its predecessor. Thus in this comparison, Xiaomi Box S wins in terms of performance.

The design of Mi Box S and Mi Box 3 are basically similar, the color is black, made of plastic, and the edges are rounded. Their boxy design is to dissipate heat and prevent the device from overheating. The thickness of the Mi Box S is uniform. On the other hand, the top of the Mi Box 3 is flat and has a slope-like design. The Xiaomi Mi Box 3 is slightly larger and heavier than the Mi Box S. However, they are all matte black and square.

The interfaces of both models have the same power interface, USB 2.0 interface, HDMI 2.0a interface and audio output interface. None of them provide an Ethernet port, which is a disadvantage for devices with poor connectivity. This problem can be solved by using an external USB to Ethernet cable. Both phones are equipped with Bluetooth remote control, and the functions are basically the same, except that there are a few extra buttons in the Mi S box. In Xiaomi Mi Box 3, the power button is located at the top, and the menu, home page and voice control buttons are located at the bottom. The volume control button is at the end.

As for the remote control settings, the remote control power of Mi box S is located at the top, and the voice assistant button is below it. Menu, homepage and application shortcut buttons are below it. Finally, there are the volume control buttons, as well as the Netflix and Live TV buttons.

As for Xiaomi Mi Box 3, its power button is in the upper left corner of the remote control, below is the menu, homepage and application control keys, and the volume button is at the bottom. Compared with Mi box S, Xiaomi Mi Box 3 does not have dedicated sound control buttons, nor does it have Netflix and live TV buttons.
Last edited: Wednesday at 5:39 PM
K

Does Mi box have Kodi?
You must log in or register to reply here.

R
What is the Xiaomi Mi Box S Specs?

Wednesday at 11:52 PM
Betty9
B
M
Xiaomi Mi Box S VS Google Chromecast with Google TV: Which is better?