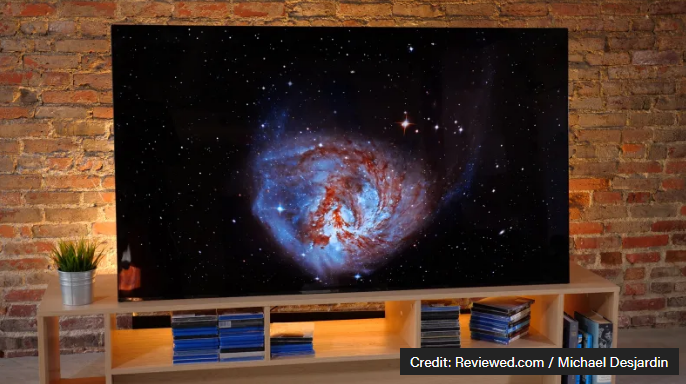 OLED (short for organic light-emitting diode) is one of the most ballyhooed display technologies in existence for very good reason.

While traditional LED/LCD TVs rely on a backlight to illuminate the picture, each pixel in an OLED panel turns on and off independently. Instead of using a backlight, the pixels emit light all on their own, which makes OLED an "emissive" display technology.

This means that when the TV needs to display black, i.e. the absence of light, the pixels are turned off completely and you're getting "real" black where you need it. The end result is contrast that is essentially impossible to duplicate on traditional LED/LCD TVs, which use a backlight (or edge lighting) that can bloom or "halo" around the darkest areas on the screen.

For example, consider a movie or TV show's depiction of a starry night: While TVs using a standard LED backlight need to flood the entire night sky with at least some dim lighting in order to share that light between each twinkling dot, an OLED panel renders each star individually with pinpoints of bright, concentrated light consisting of a few self-illuminated pixels.

The surrounding night sky, therefore, is free to be as inky-black as the content's creator originally intended. It all comes down to contrast—the cornerstone of a display's overall performance. And OLED TVs produce the best contrast of any easily obtainable display tech on the market right now.

What are quantum dots? In a nutshell, they're microscopic nanocrystals that react to a specific color of (blue) light by emitting red and green light, depending on their size in nanometers. Quantum dots are usually applied as a film that covers the entire screen space (inside the TV), but are also sometimes applied in tubes along the screen's perimeters (if the TV is edge-lit, for example).

The end result is TVs that can produce much more richly saturated colors, especially colors that rely on combinations of red and green, than those using the same backlighting technology without quantum dots.

Although the term "QLED" was originally popularized by Samsung to market its high-end quantum dot TVs, both Hisense and TCL have flirted with the moniker in the past, and Sony was actually the first TV manufacturer to wield quantum dots in its displays. Today, conducting a Google search for "QLED" produces mostly Samsung-related results, but for our purposes here, the term is a catch-all for displays that feature quantum dots. 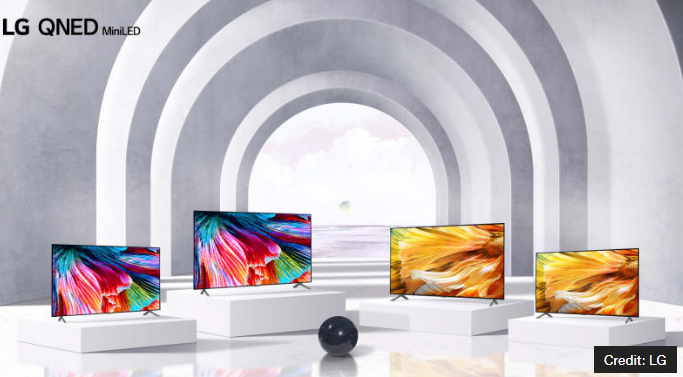 New in 2021, QNED is the moniker that LG has applied to its quantum dot-equipped (Q), NanoCell (N) "emitting diode (ED)" TVs. If you're scratching your head a bit over this one, we don't blame you. But in LG's defense, Samsung kind of did it first with "QLED."

Despite the confusing naming scheme, QNED TVs (which, as of right now, are not yet available to test or buy) seem to offer a winning combination of technologies on paper. These are traditional LED/LCD TVs, albeit they're also kitted out with quantum dots (explained above). In addition, they incorporate LG's proprietary NanoCell tech, which the company describes as particles that absorb unwanted wavelengths of light. Finally, they incorporate mini-LED backlights (more on that below).

One key spec that will likely differentiate LG's QNED models from Samsung's QLED models (in 2021, both have variants that combine quantum dot color enhancement with mini-LED backlights) is that LG's non-OLED TVs tend to use a different panel type. LG's TVs often use IPS-style LCD panels, while Samsung (and most other LED/LCD TV manufacturers) use VA-style LCD panels. Without getting too into the weeds on what that means, the best way to think about them is that IPS panels have wider viewing angles than VA, while VA panels tend to do a better job producing dark shadow tones.

While it all gets more complex the deeper you dive, the key thing to know about "QNED" is that you're getting a quantum dot version of LG's popular NanoCell TVs. If it says "QNED," it's an LG TV.

To recap: The "O" in "OLED" means "organic" and the "Q" in "QLED" means "quantum," while the "QN" in "QNED" means (roughly) "Quantum Nanocell." But there are also a few other important terms you may want to be aware of when arming yourself to pick your next TV.

The "U" in "ULED," however, refers to "Ultra," and as it turns out, the concept is about as slippery as it sounds. The term was coined by Hisense, and we can only assume its inception was a direct response to the rise in popularity of OLED TVs and/or QLED TVs.

Unlike OLED and QLED, which refer to tangible pieces of hardware, ULED is a proprietary term that refers to a suite of Hisense hardware and Hisense software working in tandem. According to Hisense, ULED is "20 picture patents working together to optimize backlighting, motion, and color data for the best viewing experience."

Because Hisense specializes in budget-friendly alternatives to premium-priced TVs, there's a good chance the ULED TV you're eyeing isn't on the level of an OLED TV or a QLED TV—especially if the ULED TV in question doesn't feature a quantum-dot panel. Of the terms listed in this article, ULED is objectively the least meaningful, which means you'll have to approach ULED TVs with a more critical eye. 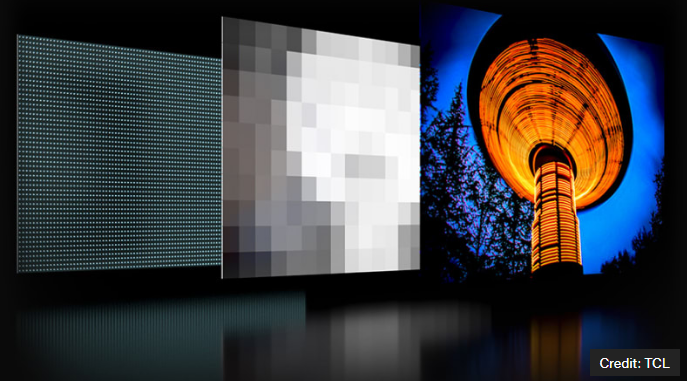 There have been rumblings about new "mini LEDs" for a couple of years, but they've finally come into their own in the current marketplace. The term mini-LED refers to an emerging backlight technology that uses LED backlights that are, as it sounds, much smaller than traditional LED backlighting. This means many more of them can be packed in on a per-inch basis than traditional LED backlights, and thus, they can be more nimble about how they illuminate an LCD display.

Right now, there's a lot of disparity in the mini-LED landscape. Referred to as "mini-LED," "Mini LED," or "Mini-LED" depending upon which manufacturer you're dealing with at the time, we've heard that up to 30,000 mini diodes can fit into a backlight, and that they're as much as 75% smaller than traditional backlight diodes.

However, not all mini-LED TVs are created equal. TCL's 2020 6-series TV uses far fewer mini-LEDs than the company's pricier 8-series. As such, the term mini-LED can be a misnomer when it comes to judging overall picture performance.

While there's no way to predict exactly how the adoption of mini-LED backlights will affect individual TVs, you can expect to find mini-LED TV variants from all of the most popular TV brands, and expect them to (generally) perform better than TVs with traditional backlights. The smaller diodes allow mini-LED TVs to be thinner in profile, and the higher diode count should enable much better control over light flow paths and local dimming functions.

How about Micro LED?​

While the names are similar, mini-LED and MicroLED are about as different as TV display technologies can be. Unlike miniLED, which is essentially just a smaller version of traditional LED backlights, MicroLED is a new kind of emissive technolgy designed, at least in part, to take on OLED.

While Mini LED displays can now be purchased by consumers, they are prohitibitvely expensives for almost all buyers, and the technology is closer to its prototype stage. It's currently only available from Samsung [Link to consumer Micro LED here], and is designed to utilize multiple panels strung together to create screens that go from traditional sizes to massive, blazingly bright walls.

Micro LED is still too new to worry about for virtually all buyers, but it is something to be aware of if you're looking down the TV display pike.

by:https://www.reviewed.com/televisions/features/oled-qled-uled-whats-the-difference
You must log in or register to reply here.