There’s a moment in “Look at the Flowers” where Negan and Daryl — having come to an understanding that Negan didn’t really switch sides — are sitting together, waiting for a woman that won’t show up, and Negan admits that yes, he did enjoy his time with the Whisperers. It’s not just the freedom, although that was obviously a big part of it: He just liked feeling like he mattered again. But Alpha killed people who didn’t need killing, including wanting to murder her own daughter, and that was too much for him. Daryl growls that he still doesn’t like him, but some sort of accord has been reached.

The Negan redemption the show has been building towards for some time has always been a dicey proposition, not just because of his myriad crimes (including his harem that nobody likes to talk about), but because his lifetime imprisonment was the last major act of the sainted Rick Grimes, and Negan can’t be a symbol of a new society if he’s not locked up. But you can’t pay Jeffrey Dean Morgan to spend an indefinite number of seasons moping in a prison cell, so his release was inevitable, and it was up to the writers to do their best to justify it. While it will probably never make sense from a moral standpoint, if this week’s scenes between Negan and Daryl are any indication, Negan being free will give the show a much-needed boost in satisfying character interplay. 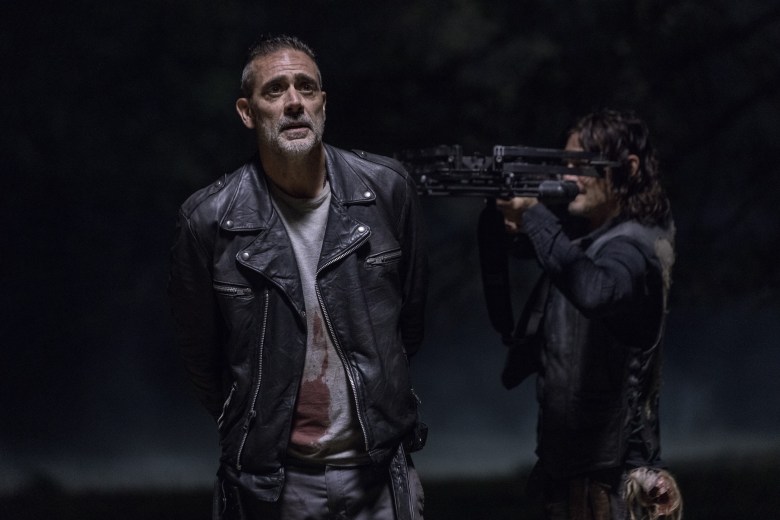 Daryl and Negan, as two tough-guy loners, would probably be at odds even without their bloody history, and their mini-“Midnight Run” adventure this week, with Daryl taking Negan prisoner because he thinks he betrayed them, is a welcome change of pace. The scene where some Whisperers get the drop on them only to fall on their knees before their new Alpha, Negan, is genuinely funny, as is Negan’s milking of the situation once he has Daryl at a disadvantage. The idea of Negan rejoining Alexandria as a free man is an exciting one, because he has so many characters to play off of now that the dynamic has changed, provided the show doesn’t just quickly smooth it all out like it tends to. But for now, let’s be optimistic. Any significant shift in the status quo for a show as long in the tooth as this one is welcome.

Unfortunately, those Daryl/Negan scenes are the highlight of what’s mostly a perfunctory “let’s get from A to B” episode. The plot centers on Carol, who considers suicide but decides against it. That description sounds flippant, but the show manifests her self-doubt in the form of a taunting Alpha, and the story can never transcend this extremely hoary cliché. It’s nice to see Samantha Morton chewing the scenery one more time (other than the many shots where she presumably had to wear a full green body suit to portray Alpha’s severed, snapping head) but the outcome is never really in doubt, and Carol’s decision to rejoin the others has less impact given that she already returned to Hilltop. Still, Alpha does bring up Carol’s past failures, like Sophia, Lizzie, and Mika, which is a welcome change from the show’s weird hang-up of only obliquely acknowledging the past. The show could use more specificity like this, but then it couldn’t justify doing the same character beats over and over.

Speaking of which, it’s time for the semi-annual Ezekiel self-pity party, though this time it’s about his impending death rather than worries about being a fraud. He’s worried about being a liability (which is valid, considering he nearly dies this episode due to a coughing fit while fighting some walkers) but this is all very reminiscent of his suicidal thoughts earlier this season, that were curbed by Michonne. This time, it’s Yumiko of all people who gives him his necessary pep talk. The answer, as always, is that he’s still King Ezekiel, dammit. Hopefully there’s something out there that can snap him out of his funk.
You must log in or register to reply here.