“The Sound Of Silence” Review: The Chaos Of New York City

New York City has a musical quality to all of its chaos. Stand in the right spot in Manhattan and you can hear it. The Sound of Silence knows and embraces this. An independent drama that contains a wholly lived in feel, there’s a vibe her that gets under your skin in the best way possible. Rather hypnotic in its soundscape and overall style, there’s a lot more her than meets the eyes. In fact, if it weren’t for a few small flaws, this would be a rather remarkable film.

The plot is deceptively simple. Peter Lucian (Peter Sarsgaard) is a “house tuner” in New York City, with the keen ability to figure out what sound in your home is throwing off your entire life. A thorough check of your apartment could lead to the need for a new toaster, for example, as the various electronic hums from your appliances are depressing you. In addition to that, Peter is categorizing the very sounds of the city, determined to catalogue them all in a massive study he hopes to publish. However, when he’s hired by Ellen Chasen (Rashida Jones), a simple job turns out to not be so simple. A lonely woman, Ellen is constantly exhausted, and when his initial prescription turns out to be wrong, Peter begins questioning his whole system. Could her issues be deeper? Maybe Peter is listening to the wrong things? The film asks a lot of questions and hopes that its audience will listen carefully. Michael Tyburski directs and co-writes here with Ben Nabors. Eric Lin handles the cinematography, while the score is by Will Bates. Supporting players include Bruce Altman, Tina Benko, Austin Pendleton, Tony Revolori, and more. 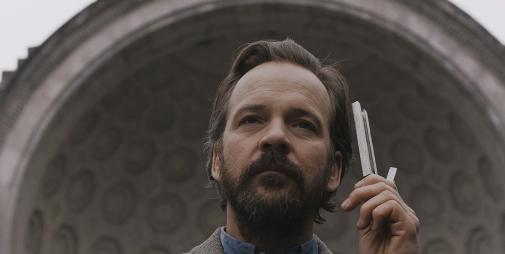 Sound is of huge importance throughout the flick. Whether it’s the sounds of Manhattan or just the tones of an apartment, there’s careful attention paid to what things sound like. Sure, Peter makes his living in this way, but it’s truly the soundtrack of the film itself. It also embraces quiet/silence, inviting or even demanding its audience to just listen. Especially in regard to the busy sounds of New York City, taking a step back in that manner is a bold idea. It might not wind up applicable in real life, but within this cinematic reality, it resonates.

Peter Sarsgaard and Rashida Jones do some of their quietest and best work here. The former could have descended into mannerisms and tics, but instead just crafts a dedicated portrait of an obsessive individual. As for the latter, she provides the much needed human element. Together, they’re a yin and yang that leads to some very intriguing conversations. As much as the sound of the movie is paramount to its success, so to are the interactions between Jones and Sarsgaard.

The Sound of Silence defies expectations at almost every turn. Most of the time, it’s a positive, though on occasion there’s a choice made by Nabors and Tyburski that breaks the spell. One is the subplot involving Tony Revolori, which feels needlessly added on. In fact, the whole through line of a corporate version of what Peter does never lands as intended. Likewise, the movie doesn’t fully stick the landing. It leaves you in the right place, but there’s a smoother way to have gotten there. Regardless, these small issues just prevent a good film from ultimately becoming a great one.

Tomorrow, audiences looking for a different kind of movie can discover The Sound of Silence and see something unlike anything else so far this year. The film is just on a completely different wavelength than most other releases. It’s well worth seeking out. The Sound of Silence is the sort of flick that’s hard to shake off. Once you see it, it will undoubtedly stay with you. Long after the credits roll, the sonic tones within will still be in your head, especially if you’re a New Yorker. This film just captures that sound perfectly.
Last edited: Apr 17, 2020
You must log in or register to reply here.