TheThe first Fire TV Cube from Amazon was really three products in one: a Fire TV streaming device, an Alexa smart speaker, and a universal remote for other devices hooked up to your TV. It offered the same streaming experience as Amazon’s other Fire TVs, but the built-in microphones allowed the Cube to be used entirely hands-free through voice commands. It could also control cable boxes, soundbars, and A/V receivers with the help of built-in IR blasters. But the original Cube lacked Dolby Vision HDR, and eventually, Amazon released a cheaper Fire TV Stick 4K that did have Dolby Vision for less money, leaving the do-everything Cube in an awkward spot.

So for 2019, Amazon has refreshed the Fire TV Cube to make it the clear flagship of the lineup. It’s got the same exact design as before, but it now has Dolby Vision, a more powerful processor, and faster response times. Amazon is trying to lessen the Cube’s dependence on the cloud, with a new “local voice control” feature that processes basic commands on the device itself. And the new Fire TV Cube can still control your home theater components and dim the smart lights when you sit down for movie night — all with just your voice.

The Fire TV Cube looks completely unchanged on the outside. It has the same controls as an Echo speaker on top (with a matte texture) with eight tiny microphone holes, and it’s glossy everywhere else. I get that Amazon chose this design for maximum IR signal passthrough, but the thing remains a huge dust magnet nonetheless.

Around back is an HDMI output, power, an input for the included IR extender, and a Micro USB port for the Ethernet adapter (also in the box) if you need it. You’ll want to use the thin IR extender cord if some of your home theater components are out of sight or tucked into a cabinet. Unfortunately, Amazon still isn’t including an HDMI cable with the $120 Fire TV Cube.

Amazon recommends that you place the Cube at least one foot away from any speaker. Even with audio blaring from a Sonos Beam, I found the mics to be pretty good at picking up my voice and the “Alexa” hot word at a normal speaking volume. 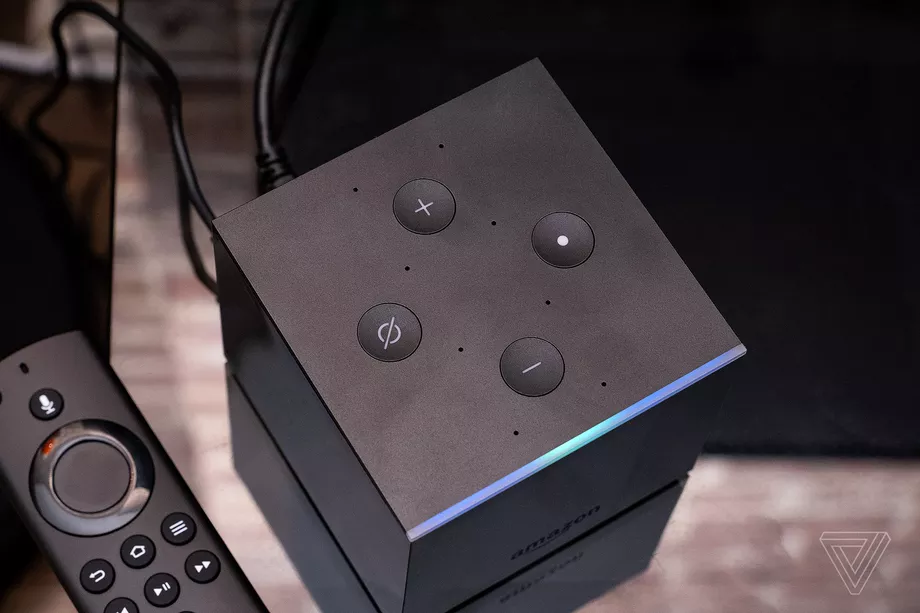 Dolby Vision and HDR10+ are new to the second-gen Fire TV Cube; the first model only had basic HDR10 support. HDR passthrough worked just fine on my TCL TV, with the display automatically recognizing when Dolby Vision or HDR10 content was being played and applying the right expanded color and brightness settings. With all major formats now supported, you’ve got plenty of choices for streaming 4K between Netflix, Prime Video, Vudu, and other apps. As a Fire TV, this year’s Cube is objectively superior to the original.

But it’s still only so-so as a universal remote. The Fire TV Cube can control most TVs, receivers, and soundbars — plus some cable boxes. You’re asked to choose your devices during setup, after which Alexa will know the ins and outs of your gear. Generally, the IR emitter works well at getting commands through to your home theater components and turning everything on in sync. But for other hardware like game consoles or Blu-ray players, Alexa can’t do very much at all. The Cube will switch to the right HDMI input, but then you’re on your own. That’s all you can really expect from IR blasters, but companies like Caavo are trying to do more with on-screen machine learning.

Still, Alexa does feel more responsive this time around. Local voice control results in certain basic voice commands being executed up to four times faster than before because the Cube handles them directly and doesn’t need any help from Amazon’s servers. The awkward pause after a voice command is gone — but only sometimes.

Local control works for your common functions like navigating the UX. You’re literally telling Alexa which way to scroll or picking a number to open the app or content that you want to watch. (“Alexa, play number 5.”) Apps like Netflix and Hulu have been optimized for hands-free voice control with these on-screen numbers next to selections, but that’s not true for many other streaming apps. In those cases, you’re still better off just using the physical Alexa remote. And the Cube will still need to check with the cloud for a lot of commands, even if the basics are now considerably speedier.

As for its secondary function as a smart speaker, the Fire TV Cube has become a better Alexa speaker, thanks to continued software updates. It now supports calls, voice messages, and the Drop In feature, so it’s basically on equal footing with an Echo. You can also add the Cube to a multiroom music setup with other Alexa devices. Remember that the Cube always plays music requests through your soundbar or TV speakers; the built-in speaker is fine for Alexa’s voice responses but isn’t suitable for much else. 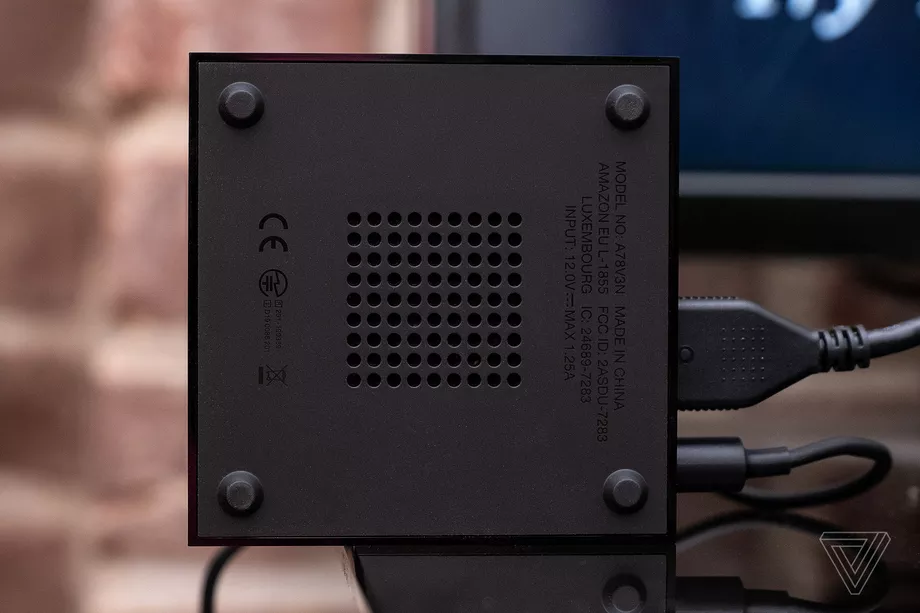 Amazon says the Cube now has a hexa-core processor, and the Fire TV interface has felt snappy in my time using it so far. But some owners of the original device found that it bogged down over time and exhibited an irritating amount of lag, and I haven’t had enough time to rule out that possibility. Amazon is adamant that the Fire TV Cube is now its fastest Fire TV, however, whereas the Fire TV Stick 4K set the bar before. So it should be more consistent and able to run Kodi, Plex, and other apps without issue. 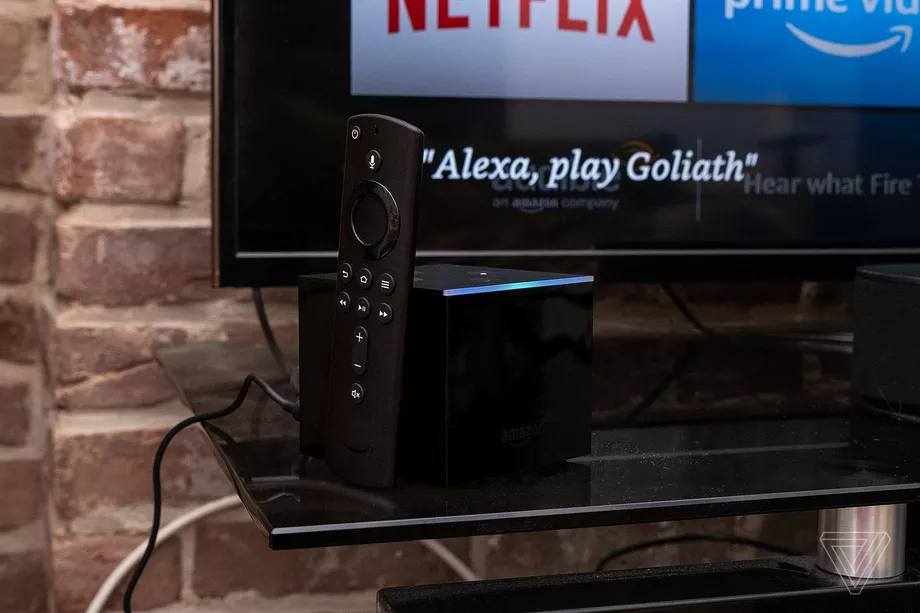 The software experience largely matches that of other Fire TV devices. All the apps you’d want are there, and Amazon has finally patched up the YouTube hole that existed last year. YouTube TV is now available as well, though Sony’s PlayStation Vue gets preferred treatment among streaming TV services and is integrated directly into Amazon’s live guide.

My usual nitpicks with Fire TV’s home screen remain: Amazon can push its originals a little too aggressively, and it also steers customers towards Prime Channel subscriptions for HBO, Starz, Epix, and other networks. But when you search for a genre or specific movie or show, the platform does a good job of showing you everywhere it can be streamed. And seeing visual responses for Alexa queries (like asking for the weather or searching for nearby restaurants) is a nice touch. But these features aren’t unique to the Cube; they’re now part of Fire TV OS as a whole.

I think the Fire TV Cube makes the most sense for people who are just getting started with Amazon’s ecosystem. If you already have an Echo Dot in your living room, the Fire TV Stick 4K makes more sense. It offers all of the same Dolby and HDR support and costs just $50. Plus, the Alexa Voice Remote bundled with that device is also capable of controlling your TV and soundbar. You’ve really got to want the Cube’s hands-free powers — and its ability to pull double duty as an Alexa speaker when the TV screen is off — for the $120 to be worth it.
Last edited: Apr 17, 2020

a thorough review, thumb up
You must log in or register to reply here.