Sometimes you need to take your gaming to another room, or maybe you just want to share some videos with friends but don’t want to crowd around the phone. The Anker Nebula Capsule II is a 720p portable projector that can fit inside a bag. It has decent battery life and enough light output for use in a dim room. It won’t rival the image quality or color accuracy of a big TV, but it can go anywhere that you do and still provide solid performance. 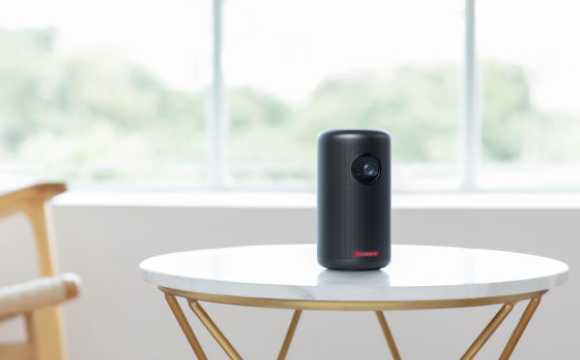 The Anker Nebula Capsule II is a cylindrical portable projector that easily fits in a bag for transport. With a diameter of 3.1 inches and a height of 5.9 inches, it’s a midrange size for a portable projector. It’s a bit bigger than its little brother, the Nebula Capsule, but smaller than the Anker Mars series. On the back is the power button and a toggle button for switching between projector and Bluetooth speaker mode. The power light changes color depending on the projector and battery status (white when on, green for full battery, blue for Bluetooth connected, etc.) There are also four ports – HDMI in, USB, USB-C for power, and a 3.5mm aux – along the bottom edge. Touch buttons for volume and menu navigation are on the top. 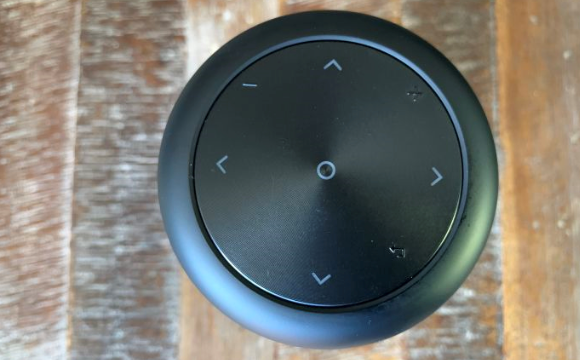 If you prefer to feel a click when you press buttons, as I do, there’s an included remote that works very well for navigation. It also includes a microphone to use the built-in Google Assistant for things like searches, input selection, and volume control. Google Assistant is a very good voice-control system and I found it worked as advertised here. 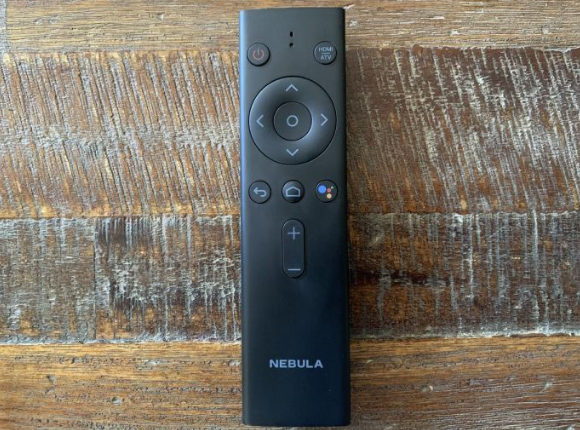 The projector has a native aspect ratio of 720p, although it will accept signals up to 1080p. When an image is projected, there’s a gray border around it that can be distracting in a dark room. At a 40-inch diagonal that border is about 0.75-inches wide and will get wider the larger the image gets. This gray light frame is an issue on many DLP chips, so it isn’t unique to the Capsule II. There isn’t a way to get rid of it, but if you have black masking around your projection screen, the light frame can disappear into that.

The rated light output of 200 ANSI lumens is decent for a projector of this size, but it isn’t enough to use in rooms that have any direct sunlight. Home projectors in general don’t fare well with ambient light until you get closer to a light output of 2,000 lumens. The ambient light causes them to look washed out and lose any shadow detail, so it’s best to keep any extra light to a minimum.

It’s possible for the Capsule II to project an image with a diagonal anywhere from 20- to 100-inches. With a throw ratio of 1.3, the projector will need to be at least 23 inches away from the wall with a maximum distance of 113 inches (9 feet 5 inches). The bigger the image, though, the dimmer it will look. I found the sweet spot for my space to be about 3.5 feet away from my screen, which gave me a 40-inch diagonal image. At that size, image brightness was good and the 720p resolution still had nice detail to it. 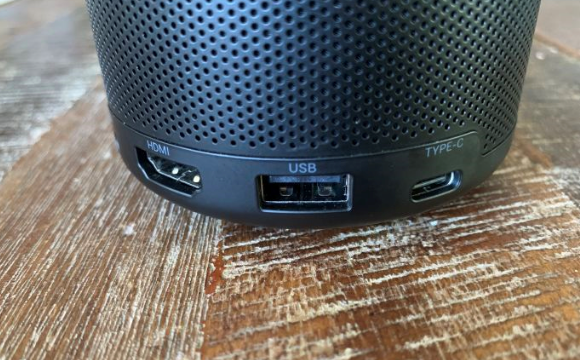 It’s easy to set up the Capsule II. There are autofocus and auto-keystone functions, so each time you place it down the projector adjusts the focus. There’s a manual focus correction option in the menu, but I never needed to use it. The autofocus worked each time.

The Android TV 9.0 OS was quick to set up as well – just connect to a network via Wi-Fi and sign into your Google account. It only comes pre-loaded with YouTube, but thousands of apps are available for download through the Google Play store. Android TV isn’t my favorite UI for projectors or TVs, but it has improved in the past couple years and is relatively quick with searches and loading.

The Capsule II has Chromecast built-in, so you can cast from any supported app on your mobile device including Disney+, Netflix, or Prime Video. This is a great solution if you’d rather use your phone to control content instead of Android TV and the remote. It’s a seamless process. 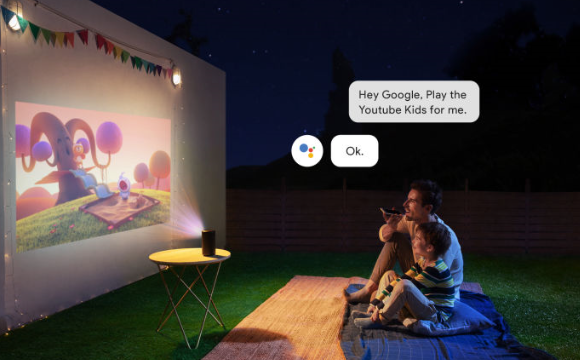 For a small projector the speaker works well and can play at a loud volume and is free of distortion. Bass response is decent for the speaker size, but if you want something more I’d recommend plugging into an external speaker with the 3.5mm out or using headphones. Connecting through the 3.5mm port disables the internal speaker. The Capsule II can be used as a standalone Bluetooth speaker for playing music from your smartphone.

The internal battery allows for 2.5-3 hours of video playtime and the projector will still work while plugged in and charging. A full charge (when the projector is not on) only takes 2.5 hours

Testing was done with a Photo Research PR-650 spectroradiometer, a Konica Minolta LS-100 luminance meter, CalMAN Ultimate calibration software and a Reed LM-81LX light meter. Test patterns were from a VideoForge Classic generator. When testing, a numerical DeltaE value is used to indicate how close to perfect a measurement is. A DeltaE of 1.0 or below is considered perfect as any difference from reference is indistinguishable. 3.0 or lower is excellent and it is hard to see a discrepancy without scrutiny, while above that value any variations become more perceptible. Warm color temperature was used for testing.

Even in the warm color temperature setting, the RGB color balance was still too blue and measured 8267K – significantly higher than the target 6500K. (For color temperature, warm refers to a redder image with a lower Kelvin number while cool refers to a bluer image with a higher K.) The average DeltaE for grayscale from black to white was 11.9. Color points DeltaE was a bit better with red, green, cyan, magenta, and yellow all between 6.8 and 3.9. Blue was the outlier at 10.6 and very oversaturated. Not surprising considering how blue the color temperature was. While these numbers seem high in comparison to the TVs we’ve measured in the past, for a small portable projector like the Capsule II they’re not unexpected. Color accuracy isn’t a strong point of any portable projector. So colors definitely look off, a little oversaturated and unnatural, and there’s a distinct blue tinge. But the purpose of the projector isn’t spot-on colors. What the Capsule II puts out is completely acceptable.

The biggest concern when it comes to projectors, especially small portable ones, is light output. The Nebula Capsule II is rated at 200 ANSI lumens (ANSI is the American National Standards Institute). Using a light meter, I calculated a light output of 132 lumens. It sounds low, and it is a little, but since the light source of the Capsule II is from an LED light, the two numbers don’t correlate that well. LED light is perceived differently by our eye than other kinds of light, like fluorescent, due to the Helmholtz-Kohlrausch effect. So 132 LED lumens is pretty close to 200 ANSI lumens. But what does that mean beyond the numbers?

Even though 200 lumens is a decent amount of light output for a small portable projector, it still is low for what is necessary for a projector to perform well with any ambient light. While I was able to stream TV shows in a dimly lit room and see the picture well enough, I wouldn’t game in that situation if I needed to see any detail whatsoever in dark spots. In a dark room at a projected image size of 40 inches, I could comfortably play Jedi: Fallen Order without needing to strain my eyes while moving through darkness.

When I pulled the projector farther from the wall though, two things happened: the image became dimmer because the light was spread out over a larger surface, and the 720p resolution became more of a detriment. At larger image sizes, the loss of detail was easy to see. This didn’t affect playability of Fallen Order or Gears 5 so much as it affected enjoyability and immersion. The detail I was used to seeing was soft.

A real win for the Capsule II is its low input lag (for a projector). There’s not much extra processing, so input lag measured 34.9ms. While it doesn’t rival most TVs, it’s still better than the vast majority of projectors out there and perfectly acceptable for any casual gaming. I had zero issue with getting my timing down on any jumping puzzles in Fallen Order or combat in Gears 5. If you’re working on your Overwatch ranking it might be best to wait until you’re on a display with a lower input lag, but for fun matches I continued to place in the middle of the pack as always.
Last edited: Apr 17, 2020

Portable projector will be the future trend. Most projector user don't care about the definition or picture quality that much considering the picture quality of projector is way too much worse than those expensive OLED TV. But projector brings us a bigger screen and its pic quality enough for a meeting or presentation when it is more portable than a big screen TV
You must log in or register to reply here.