The Control Center ties together all of the various media devices under the average TV — receiver, cable box, streaming box, and even Blu-ray player — and allows you to seamlessly switch between streaming content and TV with voice commands. It is a very good remote control.

The Control Center isn’t perfect, by any means. I’ve been testing one myself since December, with a preview build of a forthcoming update that allows for smart TV control, and there are clear places for improvement and feature additions. I also think the pricing model is a little confusing. But it’s the first remote I’ve used that even attempts to build a new foundation for how all the stuff connected to your TV should work together, and it’s a no-brainer if you’re juggling between a cable box and streaming devices connected to your TV.

Let’s start with the price, which is a little confusing and should be simplified. The Control Center itself lists for $99, although it routinely falls to $69 at places like Best Buy. But upon plugging it in, you’ll immediately be asked to sign up for a $19.99/yr service plan, which adds guide data and a search feature that can automatically open the right app on the right device and begin streaming content. (The Control Center will work just fine as a regular universal remote without paying the fee, but the whole point here is the search functionality, so, you know.) This feels more scammy than it should, but you can also buy a lifetime subscription for $50 and avoid the recurring fee. So just think of it as a $150 remote that’s often on sale for $120 — which is how Caavo should sell it in the first place.

CAAVO’S SECRET SAUCE IS MACHINE VISION
The reason you have to plug everything into the Control Center is that Caavo’s secret sauce is machine vision: it can see the user interfaces of your various devices and operate them directly on your behalf. So when you ask it to play “The Verge’s iPhone review on YouTube,” the Caavo switches to the Apple TV, opens the YouTube app, selects the search menu, types in the correct YouTube ID, and opens the video for you.

This all happens in the background, under a gray overlay screen, and while it takes a little bit longer than a tech-savvy person could do on their own, it’s a tremendous improvement for anyone who can’t be bothered to understand the distinctions between different devices, apps, and interface metaphors. You ask it for a YouTube video, and a few seconds later that YouTube video is playing. You ask it to “switch to ABC,” and a few seconds later the cable box is on the screen, tuned to whatever channel ABC is on. You pick up a PS4 controller and hit the button, and the PS4 shows up on the screen. You can pick up your device’s original remote and click around, and the Control Center remote will be in the right mode when you pick it up again, which is a huge leap over IR remotes like the Harmony series. It’s relatively seamless.

(The Caavo comes with two IR blaster pods in the box, but you might not need them: it also fires IR out of the main box. Strangely, the remote itself doesn’t send IR commands, which would be useful for certain TV setups.) 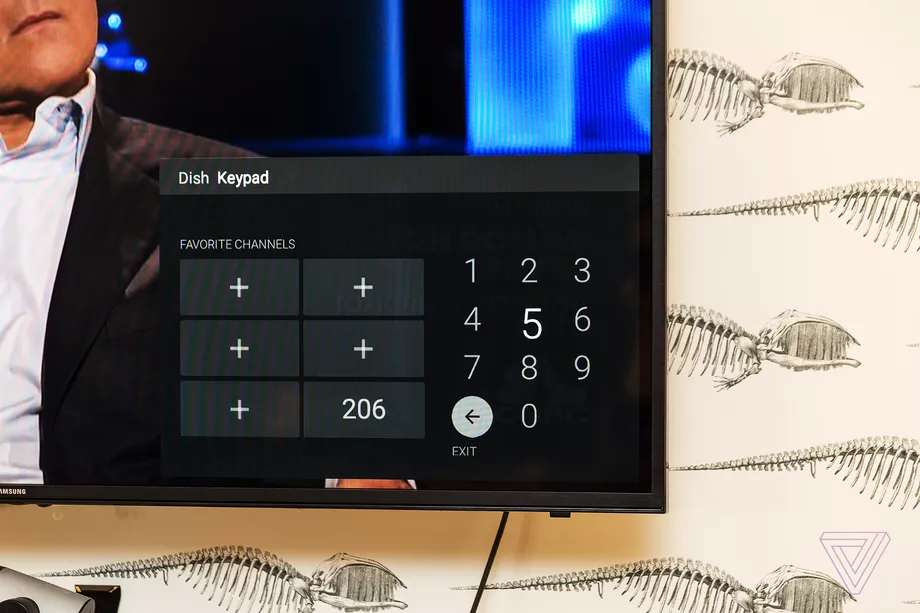 You control all this using the remote, which has a D-pad and a fairly constrained set of the usual buttons: power, play / pause, home, menu, back, and volume / mute. The volume buttons are at the top, above the D-pad, which is awkward. There’s also a grid button, which brings up an on-screen number pad if you feel the need to operate your cable box by typing in channel numbers, and up / down arrows that map to channel up and down. (If, like me, you often page through your cable box’s grid guide with the channel buttons, you will find the up and down arrows maddeningly reversed.)

There’s also a button to switch inputs confusingly labeled with a share icon, and a large silver Caavo button that brings up the main Caavo interface overlay. And, of course, there’s a mic button that you hold down to issue voice commands. 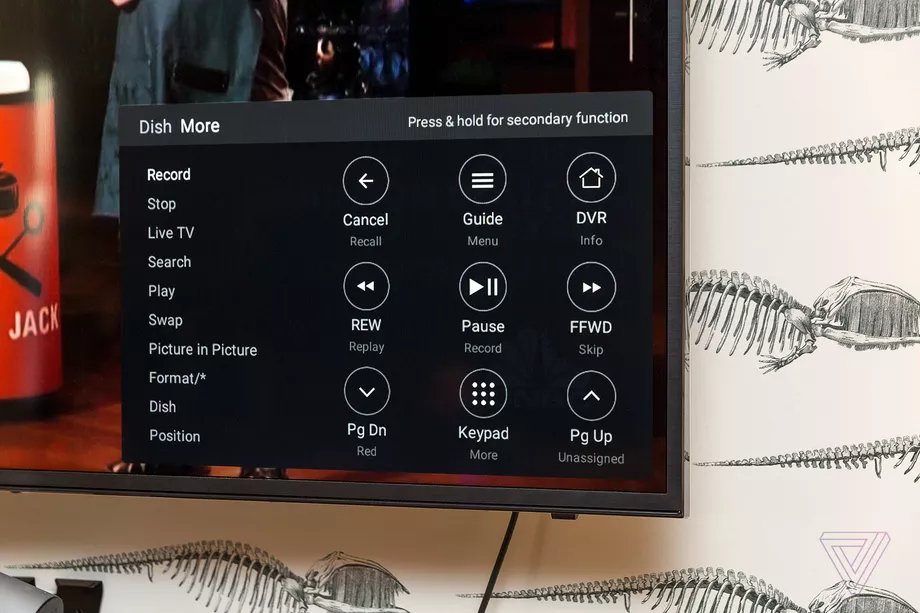 That’s not quite enough buttons to fully operate most devices, so many of them are mapped with secondary long-press functions. That would ordinarily be a usability nightmare, but Caavo does a neat trick here: the remote is touch-sensitive and a little label pops up in the corner of your TV when you touch a button, showing you what it does and what a long press will do. This is terrific — it’s a small thing that goes a long way towards demystifying an otherwise strange collection of symbols on the remote.

I do wish the remote was matte instead of gloss plastic, which picks up fingerprints instantly. And slightly more buttons would be good, especially if they were programmable — my parents both initially missed their Sony TV remote with its big NETFLIX button. But really, you want to use your voice.

VoiceVoice commands on the Caavo aren’t perfect, but they’re good enough that it’s easy and inviting to use them for most things. The main issue is that you have to use pretty specific phrases to make things happen, so saying “switch to NBC” will work, but “turn on NBC” might bring up a page of random search results. As with most voice assistants, it’s not great if you have an accent, and searching for Bollywood movies often landed in a dead end. But for the most part, it works, and works well once you get a sense of its quirks and limitations.

Caavo also has integrations with Alexa and Google Assistant, although these are pretty hit or miss. I was never able to make the Alexa integration work at all, and the Google Assistant integration was so spotty I stopped trying after a while. (When it did work, it was great, if convoluted: saying “hey Google, tell Caavo to switch to HBO” is quite a mouthful.)

These are all minor nitpicks — overall, the Control Center does such a good job managing multiple TV devices that its failings tend to stand out.

There are two things the Control Center can’t do which might be dealbreakers for you, however: it cannot at this time pass a Dolby Vision signal, and its ability to control smart TVs is extremely constrained.
Last edited: Apr 17, 2020

HOLD OFF IF DOLBY VISION SUPPORT IS IMPORTANT TO YOU
The control center handles standard HDR just fine, but not Dolby Vision. Caavo promised a software update for Dolby Vision when it announced the Control Center, but its fall ship date has come and gone, and the company didn’t have a timeline for me when I asked. (I actually held this review back so I could try and test Dolby Vision, but it doesn’t seem like it’s coming soon.) If Dolby Vision is important to you, I would hold off until that support actually ships.

Same with smart TV control. I’ve been testing an early build of the Caavo software that offers the ability to control Android-based smart TVs like my Sony A8F. That control happens over the network, and setup was super messy, because Android TVs run Android, with all of its attendant complexity. (At one point, after many attempts to make it work, the Caavo team forwarded a note from Sony suggesting that I flip a setting called “Simple IP control” to “ON, but ALTERNATIVELY TRY with OFF.” This is a true story.)

After some effort, it did eventually work, albeit with fewer features than with other devices: since the Control Center’s machine vision system can’t see what’s on the TV screen, it can’t really operate the smart TV interface the same way it can run an Apple TV or Roku on your behalf. You’re left to navigate your smart TV apps with the D-pad, just as with any other universal remote, and clicking the remote’s Caavo button switches you back to the Caavo input. And the Control Center can’t deep link into smart TV apps to automatically play content yet, although that appears to be in the cards.

AllAll of this is to say that I wouldn’t buy a Control Center if you’re using your smart TV apps a lot; CTO Ashish Agaarwal has been forthright with me that smart TV software and control APIs are essentially a disaster across the industry. This isn’t really Caavo’s fault, but smart TVs are getting good enough to make buying standalone boxes unnecessary, and the company is going to have to figure out some better integrations to stay relevant over time. (Although if smart TV makers keep running pervasive data-tracking software, it might be wise to keep your TV off the WiFi entirely and go with all standalone boxes anyway.)

All in all, the Caavo Control Center is the first really successful rethinking of the universal remote control in a very long time. It’s a little quirky, but it makes using all the devices plugged into a TV way more seamless and inviting than having a stack of remotes on the table, and it works better than other universal remotes I’ve tried. And importantly, my parents seem to like it.
You must log in or register to reply here.