"The Promise" is a big-budget Chinese martial arts lollapalooza; in fact, it's said to be the most expensive movie ever shot in China. It follows hard on "House of Flying Daggers," "Hero," "The Emperor and the Assassin" and "Crouching Tiger, Hidden Dragon" and, in their style, is full of colorful kung fu gymnastics, magical landscapes, yards of billowing robes and weird hats. 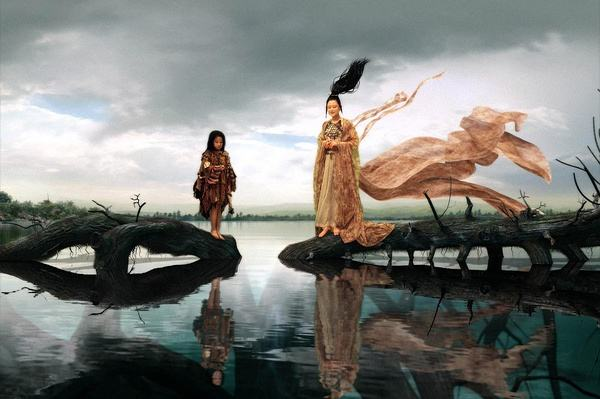 The movie is directed by Chen Kaige, who made a more realistic and politically pointed epic, "Farewell My Concubine," a decade ago, but also the less realistic and less pointed "The Emperor and the Assassin" five years ago.

Jang Dong-Gun, as a slave, and Cecilia Cheung, as a princess, play star-crossed lovers in "The Promise." Left, Hiroyuki Sanada as another of the princess's suitors.
The movie's primary flaw is that it doesn't star Ziyi Zhang.

Its secondary flaw is that it doesn't star Jet Li.