French Connection II (1975) review: the one everyone should add to watchlist

Rarely are there sequels (especially those of action films or crime thrillers) that actually turn out to be good. French Connection II, the one I’m going to discuss here, is one of the best.

The film most likely wouldn’t be as enjoyable to those who haven’t seen the first. It takes place where the original “French Connection” left off, and it follows the famous hard-nosed cop “Popeye” Doyle as he arrives in France. It is brought to the viewer’s attention that Doyle has come to France in pursuit of Alain Charnier, the infamous drug smuggler that evaded capture in the first film. 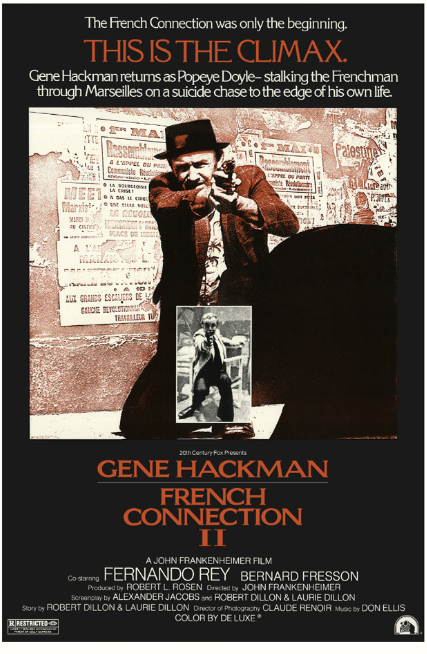 Upon arrival, Doyle is looked down upon by Barthélémy, the man he has to take orders from. In one of the opening sequences, Doyle and Barthélémy run to run into some action. With guns blazing from every direction, Doyle sees one of the culprits fleeing the scene and proceeds to chase after him. After a satisfyingly intense chase scene, Doyle catches up and gives the culprit a severe beating.

The culprit is soon revealed to be an undercover police officer. Barthélémy becomes extremely strict with Doyle from this point on, and their animosity for one another plays a big part in the rest of the film.

But, for the first 30 minutes or so, the acrimony between Doyle and Barthélémy is just meant to be looked at as a side story. The real storyline revolves around Doyle attempting to take down Charnier. A good ways into the story, Charnier finds out about Doyle and gets some men to capture him. He then interrogates him in an attempt to gain information about what the police know about him and his drug smuggling.

After two weeks of drugging and interrogating Doyle, Charnier’s men dump him on the street right in front of the police and quickly drive off. Doyle is nurtured back to health, but after two weeks of being drugged, he develops an addiction. The police force him to go “cold turkey.” In the sequence that Doyle does go cold turkey, he is marvelously portrayed by Gene Hackman with a performance that should have earned him another OSCAR nomination for his reprisal of the character.

But, the best part of the film doesn’t come from the shoot-outs, the cold turkey scene, or the chase scenes; to this viewer, the film’s climax is without a doubt the ending. The final few seconds of the picture are some of the most satisfying you’ll ever see, and they are sure to leave a memorable impact.

French Connection II isn’t an action movie or a drama. It’s a blend of both and it works extremely well at building intensity, conjuring humor, and sparking emotion. The inclusions of numerous genres make it one hell of a powerful film, and one of the most underrated of the 70’s.

Good choice.Thanks. I usually like the original “French Connection”
You must log in or register to reply here.