The movie started with a depiction of the reaction of the French people during the final of the World Cup in Russia last year. In the impression, the black children were still talking about the fact that Osman Dembele and Mbappe were not on the field.

Friends who know this world champion know that the three lines headed by Mbappe, Pogba (Kante), and Umtiti (Varane) are all blacks, not counting Dembele and Lemar. , Matuidi and other main players. There are more than half of the six blacks in the 11-man starting lineup of the French team finals. It is no exaggeration to say that the Black Minority gave France the Cup of Hercules. It ’s not difficult to understand the director ’s intention to set up this title, not only through the grand scene of everyone celebrating the victory on the Champs Elysées, but also to create an atmosphere and bring out the cool title of the “tragic world”, but it also implies that the war starts from one It has already started from the beginning, that is, who is this France?

A small detail must be mentioned here. The Pink Pig Squad just started having a little chat in the market: Pink Pig said he was the Golden Globe, the team's black brother said it was Mbappe, Pink Pig denied that he thought it was Modric. A casual conversation, but the amount of information is huge. 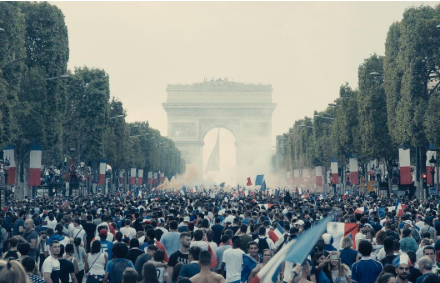 First explain that the Golden Globe is the highest individual award for football. It has been monopolized by Messi and Ronaldo in the past decade. Look at two more candidates: Mbappe is a Frenchman, one of the biggest champions of the World Cup and the hottest star in football today, and black minorities; Modric is the core player of the French team ’s final opponent Croatia, the World Cup has the most Golden Globe Awards (although this award has been regarded as a consolation prize for the runner-up in recent years), as well as white people. Then look back at that dialogue, the pink pig who is a Frenchman would rather award the Golden Globe to black players who are not given to opponents or his own country. The irreconcilable racial contradiction is conveyed in two sentences. In fact, what the movie finally told us was the irreconcilable ending. (Interestingly, the final winner of the Golden Globes was Modric, Mbappé ranked fourth, and his country was against his teammate Gleitzman.)

The last thing I want to say is that this may be a microcosm of why I do n’t like "Miserable World". It's so neat that it doesn't even use the element of football. Every scene is like a carefully calculated component, and finally it ends in some way of sublimation. And I have no feeling for this kind of expression of college entrance examination composition, or even a little bit of resistance, this is still on the premise of not discussing the character arc (in fact, the final battle because the character collapsed in me is also a sub-item).


Who the hell is france

I was also amused in this section, but it is different from your point. It ’s the pink pig who said that Mbappe is too fluttering. It ’s been a few years at most. Let ’s look at it today. It ’s a bit like Hao Haidong ’s taste.
You must log in or register to reply here.