NOVA: The Planets, the new series which are available on Amazon Prime, has got a huge number of different kinds of reviews. Overall, If you like planets and space; cant' go wrong with this series. This series has beautiful cinematography from all the major explorer vessels that have visited each planet and major moons in our solar system. Stunning vistas are reminiscent of our own earth yet comprised of ice mountains and methane seas. Additionally, it has narration by experts and those who supported the journeys to each celestial body. It is informative and soothing, being a small part of the splendor of our solar system. 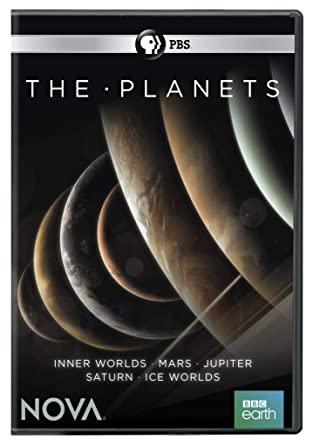 Sending probes out to investigate each of our solar system's other planets and their moons up close has dramatically increased our understanding of how each planet was born and developed.In this fascinating series, planetary scientists discuss the remarkable information they've learned from the data & images sent back from the probes that have helped them understand just how visually stunning and unique each planet and its moons are from one another

The roles that Jupiter and Saturn played in the story of where the other planets would eventually find a stable orbit around the sun and how this orbital position so strongly affected how the smaller planets would develop into such different worlds, even though they all formed from the same rocky material and gas that orbited the young sun.

These probes have also helped scientists piece together the amazing series of events that happened in the distant past which may have led to the earth becoming a water world, teeming with life. This series reminds me of just how fortunate I am to live on our perfect spaceship, the beautiful planet Earth that has nurtured so many forms of life for so long, while all of the other planets are so hostile to life, or they lost their habitabiity long ago. I'm much more aware, after watching "The Planets" that in a few hundred million years, because as it ages our sun will get much brighter and hotter, so will the Earth, and it will no longer be a world that can support life.

This series is marvelous and I highly recommend it to everyone who has an inquiring mind and a sense of wonder about this universe, and if there are other intelligent beings lucky enough to live on a planet filled with a rich diversity of life in another solar system as fascinating as ours.
Last edited: Apr 17, 2020

Well done! This documentary on Jupiter was easy to understand and kept my attention. All of the original footage from NASA was mesmerizing, and I believe every school of Science in the country and world should be required to watch this.
You must log in or register to reply here.