NVIDIA Shield TV is the best for gamers

NVIDIA Shield TV
Honestly, this isn’t even a fair fight. 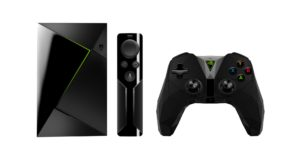 ​
NVIDIA, the graphics powerhouse behind most of the world’s top performing PC gaming systems, stormed on to the scene in May 2015 with the NVIDIA Shield Android TV console. Unlike the Razer Forge TV, which never really caught on, the Shield has a devoted following of Kodi enthusiasts, developers and causal gamers that have made it extremely popular.

Now redesigned for 2020, the Shield TV is aimed at the user who want more power and storage from their streaming device than a Roku or Fire TV can give, but don’t need to go into the super high-end streaming devices like the Cyrus Stream Xa or Naim ND5 Xs. It has the high-end Tegra X1 CPU, 3GB of RAM and a graphic processor with a whopping 256 cores!

The Shield user interface is one of the slickest I’ve seen. Google’s official Android TV interface runs on top of Android 8.0 Oreo – the only device on this list to use the latest version of Android.
Last edited: Apr 17, 2020

What to love: The Shield TV has most of the items on our checklist. It is also one of the few devices to have 4K Netflix, Amazon Prime and YouTube streaming. Both the controller and remote fit comfortably in your hands, and both include NVIDIA’s voice search using Google Now. As one of Kodi’s Diamond Sponsors, NVIDIA has the support of Team Kodi, so you can be sure that the latest versions of Kodi will work the way they’re supposed to.

What’s missing: Not much now that Amazon Prime Video has joined the party. It’s worth noting that while it has 5.1 and 7.1 audio passthrough, there are some issues getting HD audio passthrough to work within Kodi at the time of this writing. Other services do not have this issue.

CHECKLIST:
The NVIDIA Shield isn’t cheap, but you definitely get what you pay for. It’s not quite the perfect streaming device, but it’s as close as you can get at this point. The 16GB version lists at $179, while the 500GB model will set you back $299 US.
You must log in or register to reply here.

Solution to disconnection between NVIDIA Shield TV and Ethernet