The Nvidia Shield TV is a refined version of the best Android TV box for years, packed with impressive new AI-based upscaling technology and a novel space-saving design.

The new Nvidia Shield TV comes in two versions: a £149.99 media streamer and a “Pro” alternative for £199 that is aimed more at gaming.

For those unfamiliar with these types of media streaming devices, they in effect add a smart TV experience to older televisions or replace the often terrible or out-of-date smart elements of more modern sets, so that you can use apps such as Amazon Prime Video, BBC iPlayer and Netflix.

Nvidia is arguably the biggest name in graphics, and also makes mobile chips called Tegra, on which these two Android TV boxes are based. The previous Shield was released in 2015 and, unlike many other smart TVs and streaming boxes, is being kept fresh with a steady stream of updates, making it the best, most supported Android TV experience available either baked into a TV or in a set-top box.

The new Shield TV doesn’t mess with the formula. You get one of the most powerful media-streaming boxes available, running the latest version of Android TV and similar long-term software support. 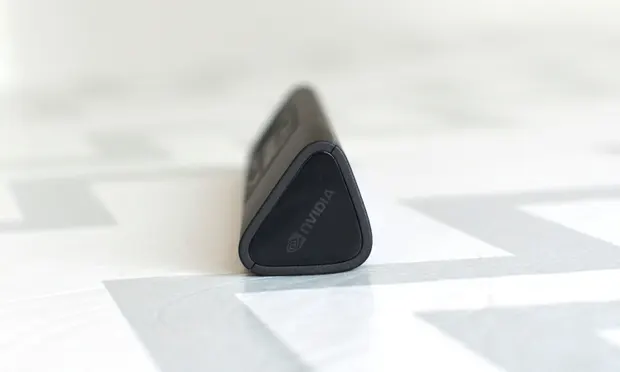 What’s new is the form factor. The standard Shield TV is not a box but a small tube with a power cable and ethernet socket in one end and an HDMI socket and microSD card slot in the other. The idea is you hide this small tube behind your TV in series with the cable without taking up any significant space.


The remote too has been rethought. Instead of being a thin, touch-sensitive remote, the new version has a triangular profile, takes two standard AAA batteries including rechargeables, has a good weight to it and an assortment of buttons that are backlit when the remote is picked up, including dedicated pause and volume buttons.

The shape may seem odd but it’s designed to prevent it slipping down the side or backs of sofas, and it works. A simple, user-friendly design.

The remote communicates with the Shield TV via Bluetooth and has an IR blaster in the end for controlling the volume on your TV, amp or soundbar. It works great.

Holding the back button brings up quick access to the settings menu, while the menu button in the top right can be customised to launch particular apps, settings or functions. There’s even a dedicated Netflix button for jumping straight in.

Alongside direct app support, the Shield TV has Chromecast 4K support built in, which means any app that can be cast from your Android or iPhone, tablet or even computer can be sent to your screen wirelessly, which includes BT Sport but not Apple TV. 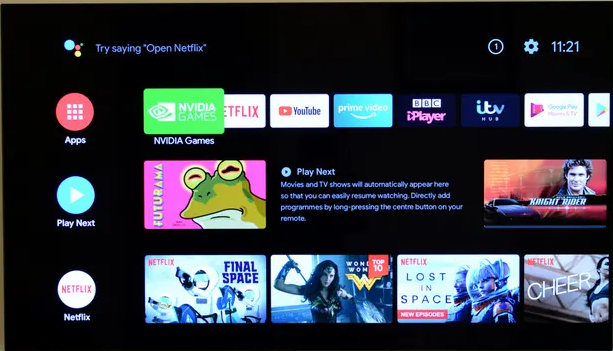 Apps other than TV and video streaming services are also available, including Android games and Nvidia’s GeForce Now game-streaming service, which has both paid and free tiers of PC games and works surprisingly well. You’ll need a controller for games, and while Nvidia sells one, you can use any Xbox or PlayStation joypad that supports Bluetooth. 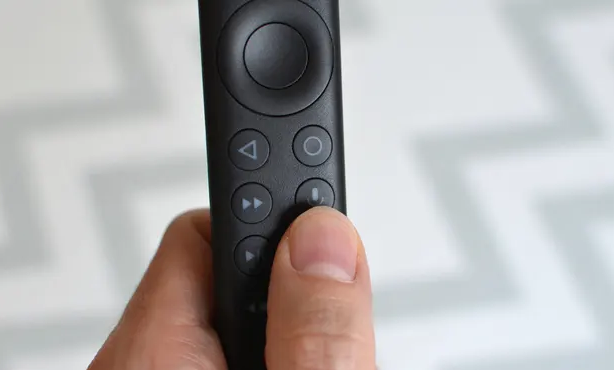 You can control playback in apps, such as playing, pausing or skipping to the next track in Spotify or even a particular time in a song, movie or TV show. You can launch apps, adjust the volume or search for shows, movies or tracks via voice. Ask Assistant to play Lost in Space and it will offer to play it via Netflix or Google Play Movies.

Then there are all the standard Assistant functions. Ask it how to get to work and it’ll give you the current state of traffic or transport and a small map. Ask it for the weather and you’ll get the forecast with visual cards. It’ll answer questions, command smart home devices, stream footage from smart cameras and hundreds of other things. The only exception I found was an inability to search for images from the web.


The Shield TV’s ace in the hole is Nvidia’s new AI upscaling technology, which takes HD content and turns it into 4K with some very impressive results. While practically every TV or set-top box can handle basic upscaling of content – stretching HD content to fit a 4K screen with four times as many pixels – Nvidia’s technology is a cut above, particularly when viewing highly detailed scenes. 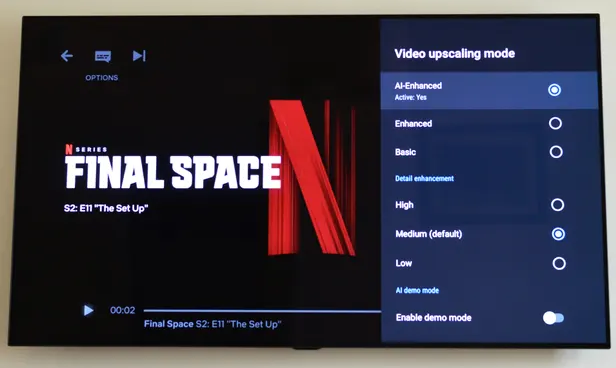 Cityscapes look incredibly crisp and detailed, while faces, cars and even wildlife are all significantly improved even compared to basic upscaling. Feed it a modern HD picture and the differences between it and real 4K content are surprisingly hard to spot. It even makes a decent job of handling something as old as NCIS, Futurama or Knight Rider.

Verdict
The original Nvidia Shield has long been the power user’s Android TV streaming box of choice, and realistically the only one I could recommend. But with its redesign as a hide-away tube and with a new, much more user-friendly and smartly designed remote, the new Shield TV is not only the best streaming box for power users, but one of the very best for regular people too – right up there with the Apple TV 4K and Amazon Fire TV Stick 4K.

On most fronts it beats or matches everything else, be it support for the latest Dolby Atmos, Vision and HDR standards, app support or even the built-in 4K Chromecast support. But it is the impressive AI upscaling that is the killer feature. If you predominantly watch HD content from Netflix, Amazon, YouTube, Google Play or BBC iPlayer et al on your 4K TV then the Shield TV is the box to buy.

The only fly in the ointment is a lack of the Apple TV or BT Sport apps in the Google Play Store on Android TV, but at least the latter can be Chromecast to the Shield TV from your phone or tablet. Only the Apple TV 4K has a wider selection of apps than available on Android TV.

The Shield TV isn’t cheap, coming in at £150, but it’s fast and feature-packed, will be supported for a long time and has one of the best remotes you can buy.

Solution to disconnection between NVIDIA Shield TV and Ethernet