Hurt People Hurt Others, But They Hurt Themselves More

Amodo sat on the hill with his mother, looking at the distant mountains. Several high-rise eucalyptus trees jumped into the eye, crowded with the trees in Zhoupan. The mother was puzzled, and it was Amodo who told her why. Eucalyptus is not a local tree species, but is transplanted from Australia. As a foreign tree species, its powerful vitality spreads on the hillside, and the local vegetation gradually loses vitality.

Combining the shot of the bulldozer pushing down the trees at the beginning of the movie and the logging industry operated locally, we can understand what is happening in this remote mountain village: it is likely that eucalyptus was introduced artificially for the purpose of forestry development. And forestry is not the only foreign object that breaks the quiet life of the village, as well as the developing tourism industry. 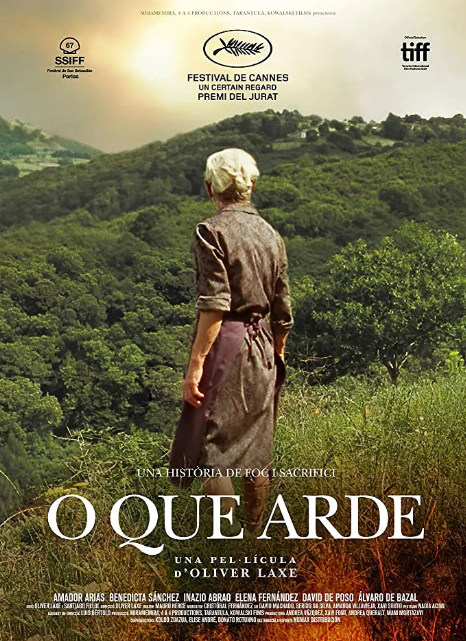 Under the introduction of his mother, the returned Amodo could have been engaged in house repair work to prepare for the arrival of tourists. But he “refuses” indifferently. The reason behind it seems not difficult to find: Amodo hates the tranquility of the village broken by the noise of travelers; , Resting on the grass ...

This information gave us a hint, revealing the reason why we arson. He is a good person, indeed, as the neighbor said; but at the same time, he is also a stubborn person. He has lived alone and in isolation, and nature has given him the joy and fun he needs. When the environment in which he had lived since his childhood was destroyed, he was obviously angry and unacceptable.

Of course, there is always an opportunity for him to make extreme moves. When his pure love for the female veterinarian was hurt, he took the old road again. Although the director did not say who the arsonist was, we clearly knew it was Amodo. Because the scene of the fire only continued after Amodo returned from the city.

Why would a kind and good person make an arson? Because he was hurt. As Amodo ’s mother said, “If they hurt others, it is because they are also hurt”. Amodo did not hurt others, nor did he vent his anger on nature. Because arson can stop logging and tourism, and bring life back to peace, he set fire.

This is an extremely poor person, with an unfathomable loneliness in his heart. It is difficult for us to find the exact reason for the arson of Amodo. As in real life, most extreme behaviors are actually made unconsciously. The director made a blank statement about this, which is extremely wise. This is why the whole movie looks charming and deep.

Olivier Laxé showed the uncommon control of young directors in "The Fire is Coming". Quite often, we can find some shadows of great directors in the film: Amodo ’s return home from prison, through the misty mountains, plus string music and singing, let us think of the film of Angel Ropolos ; There is also a vision lens that slowly follows the characters, which is Takovsky's signature.

The most important thing is that "The Great Fire is Coming" has a deep and quiet presentation of life. Creating a fascinating texture of alienation between the camera and the object, which undoubtedly reminds us of Abbas Kiarostami and his great movie: simplicity, deepness, proper omission and blankness, and the inner world of the character Reveal. This is a real masterpiece and needs to be calmly watched.

I don't think the mountain fire was what he did later. He passed the fire brigade on his way back. Looking at the team from the rearview mirror should be unexpected. The later mountain fire may have been caused by nature, and those who benefited (sorry for labeling them) sent anger to him because he was an arsonist. He did not explain it. His mother was so gentle, stepping on the Old sneakers.
You must log in or register to reply here.