Luminopia, a startup focused on children's health, recently announced that the U.S. Food and Drug Administration (FDA) has approved its digital therapy to improve vision disorders in children. This is a VR (virtual reality) based therapy that can be used to improve visual impairments in children, such as amblyopia or lazy eye. Patients are understood to be able to improve their vision by wearing a VR headset to watch a modified TV show or movie.

Amblyopia often referred to as lazy eye, is a medical condition characterized by a loss of visual acuity. Amblyopia is usually diagnosed in early childhood and is caused by a neurological defect that inhibits visual input from the weaker eye, resulting in long-term vision deficits.

Luminopia One, developed by Luminopia, is a software-only digital therapy used with software application-compatible Head-Mounted Displays (HMDs) to nurture the less sighted eyes and train the eyes to work together by watching TV and movies.
M

2. 105 children participated in clinical trials 1.8 improvements in vision in the treatment group​

Luminopia, which has more than 700 hours of video content in its library, partnered with children's content distributors such as Nelvana and Sesame Workshop to develop the tool. 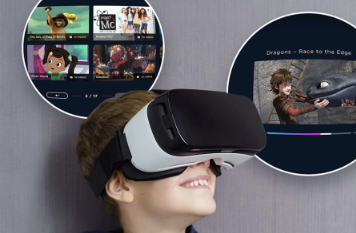 Luminopia One was approved based on positive data from multiple clinical trials, including a recent Phase 3 pivotal trial published in the Journal of the American Academy of Ophthalmology, demonstrating the safety and efficacy of the treatment in amblyopic patients aged 4-7 years. This study is the first successful randomized controlled trial of amblyopia treatment in more than a decade and the first to show the efficacy of the new binocular approach.

In this phase 3 trial, 105 children were randomly assigned to a treatment group wearing Luminopia One glasses and a control group wearing corrective eyewear alone. 4 weeks later, there was a statistically significant difference in visual acuity improvement between the two groups. In the 12-week control, the mean improvement in amblyopic visual acuity was 1.8 in the treatment group and 0.8 in the control group according to the standard logarithmic visual acuity scale (p=0.001), a significant difference between the two groups.

this one is really cool
J

That will help a lot of children, I wish I have this when I was young
You must log in or register to reply here.

C
Digital TV, IPTV, Internet TV, and smart TV: What is the difference?