Sony revealed the PlayStation 5 controller in a tweet Tuesday. Called the DualSense, the PS5 wireless controller is being shipped to game developers now so they can use its "unique features" in games. PlayStation says it retained the best features from the DualShock 4, while adding new functions and changing the design for the upcoming PlayStation 5. 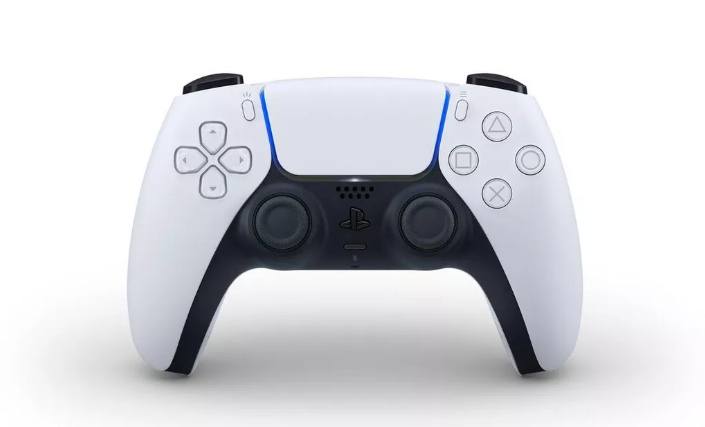 "We adopted haptic feedback, which adds a variety of powerful sensations you'll feel when you play, such as the slow grittiness of driving a car through mud," Sony's PlayStation team said in a blog post. "We also incorporated adaptive triggers into the L2 and R2 buttons of DualSense so you can truly feel the tension of your actions, like when drawing a bow to shoot an arrow."

Sony says it changed the angle of the hand triggers to make the controller feel smaller than it is, and updated the grip. It's also reduced the weight of the controller, worked on how to make it retain battery longer and added a built-in microphone array so you can with friends while playing.

The share button has been replaced with a "create" button. "With Create, we're once again pioneering new ways for players to create epic gameplay content to share with the world, or just to enjoy for themselves," the PlayStation team said.

Some wondered if wired headphones will be tossed aside altogether with the internal mic in the DualSense controller. That is not the case, according to PlayStation product manager Toshimasa Aoki. He tweeted Tuesday that the new PS5 controller will still have an audio jack like the DualShock 4 to plug in a headset.

Still have an audio jack so you can plug in your own headsets like DS4
— Toshimasa Aoki (@toshimasa_aoki) April 8, 2020
Click to expand...

The PS5 will be released for holiday 2020. The price is still unknown, but it reportedly costs around $450 to manufacture one.

The PlayStation 5 controller looks like the cross between an Xbox controller and a pair of basketball shoes.
You must log in or register to reply here.