At a recent technical conference, Sony announced the detailed configuration of the PS5 and announced that it is backward compatible with PS4 games. 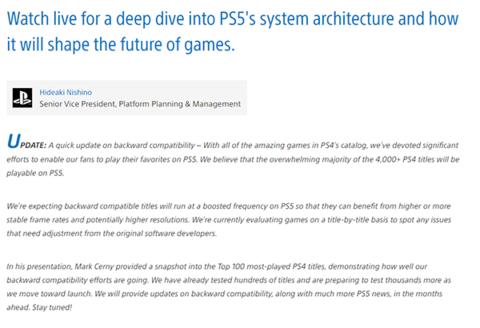 However, at the time, the official only disclosed that it would be compatible with PS4's Top 100 games in the initial launch, which seems to be far behind the competitor's Xbox Series X.Perhaps to give players more confidence, Sony officially updated the article through the PlayStation Blog to further explain the PS4 compatibility of the PS5.

According to the blog, Sony officially believes that the PS5 is compatible with more than 4000 PS4 games.And relying on the power of PS5, these PS4 games can achieve higher or more stable frames and higher resolutions.Sony's team is evaluating each game individually to determine how those games need to be adjusted for compatibility.
Last edited: Apr 17, 2020

Good news, thanks to PS4 users
You must log in or register to reply here.