Recently, an American drama has become popular. To be precise, this is a documentary, but its "drama" is more brilliant than any American drama written by any top screenwriter.

It involves various grotesque horse-grabbing incidents such as gangs, drug trafficking, homicide, conspiracy, polygamy, mind control, and FBI eavesdropping investigations. There is even a presidential election!
The series is so exciting that all the stars have come to an end. For example, Kim Kardashian, they said on social networks that the show is really crazy, and it is difficult to imagine that this is happening around us.


He has his own zoo and has more than 200 large cats, including tigers, lions, leopards, and bears.
You can enter his zoo to see him and see his intimate contact with his big cats. He said that he has a deep emotional connection with his big cats.

Many people are fascinated by the big cats he raises, and the tide generally flows into his zoo to take pictures with the lions.
Tiger King Joe Wild's glorious deeds certainly don't stop at raising tigers. He just pulls out something about him, enough to make a movie.

First of all, he is gay, which is normal, but the point is that he has two straight male husbands, both of whom are dead on him, and they even held a three-person wedding.

He was a country music singer in his early years, and has performed songs and music videos.
He even ran for governor and president of the United States, and someone really voted for him.

When he started the zoo, he was also a god-like boss, and the employees all worked hard for him with extremely low salary. You can't figure out how Joe Wild brainwashed them.
Interestingly, the ability to lead a "cult leader" in a tiger circle seems to be standard.

With the step-by-step understanding of Joe Wild, we saw more incredible things.
For example, Dr. Antell, who runs the Myrtle Beach Wildlife Park, raises tigers and is more business-minded than Joe Wild.

One of his special features is to allow tourists to pet tiger cubs personally and charge high fees. In the name of protection, this is the best time for us to promote the protection of rainforests and protect these cute cubs.
But at the same time, he brainwashed countless girls, most of them virgins, letting them be his beast trainer wholeheartedly, and of course his harem.

Joe Wild and Dr. Antell are a bit like competitors, but in general they are a class of people, each of which is king, and Joe Wild also learned a lot of business ideas from Dr. Antell.
And the operators of their "zoo route" have been the eyes of another kind of people for so many years.
Animal protectionist Carlo Baskin.

This woman is also a crazy tiger lover, but she hates the people who keep the tigers in cages. She looks for ways to shut down their zoos, tries to find evidence of their abuse and even killing tigers These tigers strive for more space.
Sounds beautiful, doesn't it?
But through the accusations of Joe Wild and Dr. Antell, Carlo Baskin is actually a complete liar.

She was crazy against Joe Wild and Dr. Antell to open zoos, hold animal tours, and trade the profitable behavior of large cats, while also keeping tigers in cages to make money by watching people, using a large number of volunteers to Be your own free labor.
She even has a bigger black history-suspected of murdering her ex-husband and cheating on huge legacy.

In short, the entire documentary is unfolding in the frenzy of these "Tiger Parties". Everyone expresses their love for tigers right in front of the camera, and in other populations, they are completely different.
Finally, Joe Wild couldn't bear the madness of Carlo Baskin, so he wanted to hire a murderer.

However, this matter is also a mystery.
Carlo Baskin was n’t dead, and the plan was n’t really implemented, but Joe Wild did talk carefully with his companions about the assassination's enforceability, and the matter was involved in the FBI.

Finally, Joe Wild was sent to prison for a series of crimes involving homicide and mistreatment of tigers.
Like some kind of retribution, Tiger King, who sent countless tigers to his cage, now lives in the cage.

There are many levels of "hazard" in "Tiger Raising".
These people who raise tigers do not protect this animal, but let them fall into a more difficult situation.
Because there are about 5,000-10,000 tigers in captivity in the entire United States, and fewer than 4,000 wild tigers in the world.
This is too humiliating.

The Tiger Party is all under the banner of "protecting wild animals" and "love tigers", and the practices are so similar. They lock up these beasts that belong to the wilderness, domesticate them, and turn them into their pets and money-making machines.
With this frenzy of consumerism, how many people really care about the living conditions of the tigers?

The dispute between the "Tiger Party" is a deeper chaos. This is like an extra-legal place we have never seen before, with a set of rivers and lakes rules that we are completely unfamiliar with.
The people who raise tigers are not essentially different from the drug lords and gangsters we usually see. They have built their own world and run a new set of power mechanisms, and prove that they are "closely related" to these beasts , Has become a method of standing at the spire of power.
This is a "new gang" world.

Watching the ugliness of their mutual attacks reveals that they are more like wild animals than real animals.
The act of trying to fight for territory by all means is the law of the jungle in human society; they regard everyone who is useful to them as prey, but the weapon of attack is changed from minions to mental brainwashing; they wish to kill the other. Competitive mentality is a kind of "king's mentality" that does not allow two tigers in one mountain.

It is no exaggeration to say that they are the retrogression and return of ancestors of human civilization.
But they are by no means the only "criminals".
Tourists and ordinary enthusiasts will rush to their amusement park, also from a similar psychological structure.
Taking photos with big cats means that you have a different label from ordinary people, and even have some kind of privilege. Therefore, uploading photos with beasts to social networks like Tinder to increase their sexual charm has become a new trend.

Visitors who visit and people who buy tigers from them are using these animals as ornaments to show their identity and value. It is this vanity that allows the "Tiger Party" to make a lot of money.
Therefore, some people in the film said that the way for these endangered wild animals to save themselves is to help people make an appointment.

People are bewitched by the similarity principle witchcraft in "Golden Branch", thinking that they get power when they are close to objects with power.
Tigers are the victims of this witchcraft mentality. 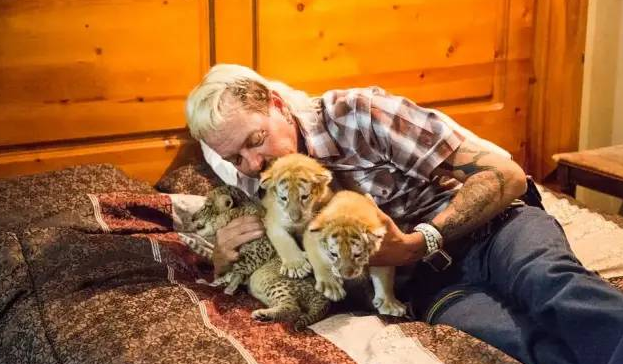 The power and strength of the beasts, in this way of performance and consumption, entered the lives of modern people and became the weight of power and strength.
The real madness in Tiger Raising is the best irony for madness. Those who are passionate about power are essentially cowards.
Last edited: Apr 18, 2020