What TV show can you watch over and over and not get tired of it? The Big Bang Theory. I still look forward to each new episode. It is currently in its 10th season, presumably its last, and all good things must end. It has won numerous Emmys, all well deserved. The most hilarious scene that I could watch over and over was this: Sheldon is stressed. In the middle of the night, he leaves the house and Leonard finds him in one of those pools of balls that children play in. Leonard wades into the balls, calling for Sheldon. You see the balls rippling and Sheldon pops up, shouting, “Bazinga!” and diving back under. This goes on for quite some time. The first time I saw this, I asked my husband to rewind it and we watched it again. And again. I couldn't stop laughing. I think I peed myself. 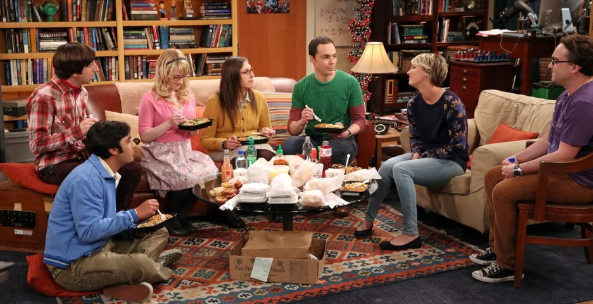 But a little personal background. BBT was the one show that kept my husband and I laughing throughout his last four years. He had lung cancer. Endless diagnostics, chemotherapy, radiation therapy, brief remissions, more diagnostics, unsuccessful surgery, more treatment, intermittent hospitalizations for pneumonitis….

We never lost our sense of humor. We recorded multiple episodes of BBT and we watched several each night while I made dinner and we ate together in front of the TV. Sometimes I had to remind him that we just watched this episode yesterday. Yes, chemo fog is a real thing. Still, we were together, and we laughed as though we were seeing the episode for the first time.

They say that laughter is the best medicine. I lost my husband on April 14, 2015. Laughter may not have been the cure, but it wasn't the cancer that took my husband. It was the treatments. The Big Bang Theory gave us laughter, and laughter kept us going.

The Big Bang Theory, its brilliant writers and cast members gave us a priceless gift. So, to them all, my deepest thanks. I will be a forever fan.

The Big Bang Theory is one of the most successful sitcoms in TV history. The show has a cult-following after 12 seasons of beloved characters and unique storylines. The show also made the seven main characters stars in their own right, earning millions of dollars. However, every success story has its criticisms and controversies.
You must log in or register to reply here.