What if Harry Potter took Malfoy's hand at first, would the ending be any different?

Harry once commented on Malfoy: Before he knew Malfoy, he couldn't even imagine that he would hate someone more than his cousin Dudley. Compared with Malfoy, Dudley was a good boy who was clever and sensible. So even if Harry took Malfoy's hand at the beginning, it might be because he didn't want to have a dispute on the train, but he had already learned from Hagrid that Slytherin was not good before, and he yearned for Gryffin many. 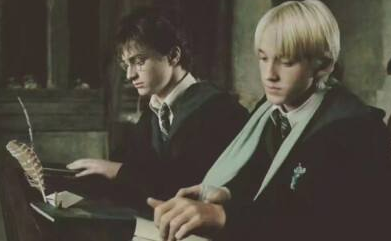 The sorting hat will not feel that Harry and Malfoy should go to Slytherin because they shook hands, so he will still be a member of Gryffindor, and will not change because of the hands held by Malfoy. Then slowly, he will still produce the above evaluation of Malfoy, and the relationship with him will still be very bad.There is no change in the probability.

If Harry took Malfoy's hand in the beginning, the Aurors should pay attention. There is obviously a very powerful black wizard who casts a Soul Curse on the first-grade children nearby.

Malfoy was the first wizard of the same age that Harry met, and even Harry almost believed in his evil. Such a perfect time and place did not make them friends. How great a miracle would it be to succeed? But even if the butterfly slaps fiercely from the place farthest from the whole earth, is it impossible to cause a hurricane that can blow these two together?

If Harry took Malfoy's hand at the beginning, then the ending would be that he would regret his life-long fascination, and he might even have lost his life and was directly killed by Voldemort-because he chose Malfoy As a friend, you will lose the friendship of Ron Hermione Naviluna and even Ginny, and Malfoy is not as good as that of his toes in terms of strength and loyalty. Camp, then it is equivalent to Harry will fight alone from beginning to end, and he came over the road in a thorny way, we have also seen, which ring has less help from friends and his own arrogance? How much can Malfoy help Harry?

And if Harry chose to be friends with Malfoy despite a series of unbearable things such as the three views of the position, would that person be Harry? Will it be that kind and pitiful Harry? Naya ’s old Dengbe said that he had trained him to save the world, and when he heard the words “mud species” influenced by Malfoy, he should slap to death the hopeless boy.

Can this goods go to salvation? Thank you for not following Malfoy to the old voodoo!
Most importantly, remember that Lily is a Muggle-born! How could Harry be friends with Malfoy?
If Harry took Malfoy's hand in the first place, unless he was cast a very powerful soul-taking spell that could not resist, or he fell because of a slippery floor.
You must log in or register to reply here.