The theme of World War II that was chewed was actually new.
Everyone has only focused on the Jews who have been cruel, but forget that Hitler's racial cleanup plan was actually black, and even we Asians?
The Jews made frequent noises, not because they were backed by the United States. This movie shows us the cruelty of World War II from another angle.
Boys and girls are in love, love is more than anything. Like the madness of the mistress's mother, she made a mistake, but never regretted it.

Unexpectedly, the boy was actually killed by his father piu piu, but he may not be able to live to the end. At the end of the story, the girl was rescued by a black French soldier. The probability is that the father is undoubtedly. The story has a very good ending, but the real history is more tragedy, and there is no comedy. It looks like a love movie, but the things behind it are really outrageous. In the whole society, children started brainwashing, and even their younger brothers were almost transformed to clean up their sisters. Under the sublimation of Hitler, racial discrimination reached a new climax in human history. 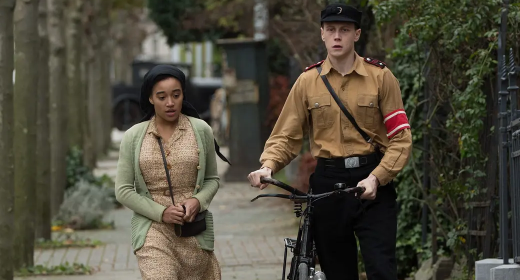 The most fearful thing in life is the confusion of self-identity cognition, Kaner's three views of the most tormented and sad are destroyed. The female host experienced the former, the male host experienced the latter. Extreme historical background, I believe that they have persecuted many young people like them. Like the hostess's mother, strong and accommodating. Maybe it was because I once owned it, so I understand. War is always destructive. I only wish that world peace. In Warsaw, tonight I watched two movies about the human cleansing plan of World War II, and I was a bit drunk.

Very well acted by Amandla Stenberg (who is heartbreakingly beautiful), George Mckay, Abbie Cornish and Christopher Eccleston. They worked very well with the poor script and oversimplistic narrative. there are some jarring ex machina moments that are so unbeliveable that they are more memorable than the overall movie. one scene, about 10 mins from the end ,that i wont spoil, made me gasp out loud and almost burts into tears. looking back it had to happen because the story had reached a bottle neck and we needed to see what happened to this particular character.

i knew of the existence of biracial Germans during WW2, some of whom survived the death camps. their story should be told but not in this syrupy adolescent way. reducing their important story into a teen romance is disrespectful and unforgiveable. overall the feeling this movie left me with is annoyance at this slick piece of race mixing propaganda. it could and should have been much better.
You must log in or register to reply here.