As an entry-level yamaha echo wall product, yamaha yas-207 first appeared in the vision of consumer customer groups in 2017. As a demonstration of yamaha's sincerity at that time, this echo wall is equipped with four 46MM bass units, two 25MM treble units and 160MM subwoofer units. The decoding technology used is upgraded to DtsVirtual:X, which is paired with Dolby to have the dual decoding technology.

The yas-108 has an outstanding rounded three-color shape, and you can see from the shape that yamaha is making a series of changes in line with the fashion trend. The 108 has six separate sound units, two tapered bass units up to 55mm in diameter, two domed bass units up to 25mm in diameter, and two 75MM subwoofer units built in. And two two-way inverting holes. From the aspect of structure, the narrow and long inbuilt inverted hole design makes the original 75MM subwoofer unit like a tiger with wings, and the low-frequency sinking scale greatly soaring. This has to make people sigh yamaha designers bold innovation. Decoding technology further improved, do not need to upgrade, direct use of technology more perfect new generation DtsVirtual:X. Dolby is, of course, indispensable. 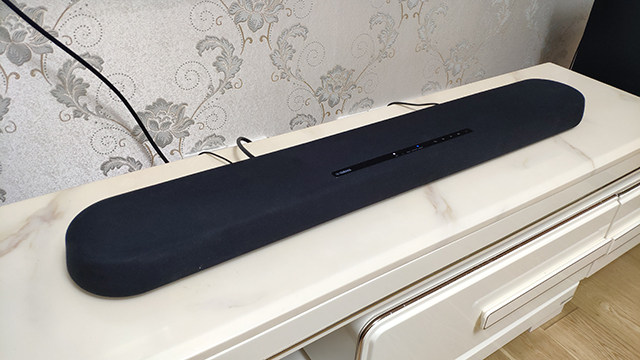 Emphasis on DtsVirtual: X, this technology originated from DTS. Its principle is the use of psychoacoustic psychoacoustic technology to restore the sound effects of overhead and satellite acoustics, according to the principles of human physiological acoustics and psychoacoustics specially processing 3D sound channel, so as to create 3D sound source from the audience behind, side or above the illusion of feeling.

When Jurassic park premiered in 1993, the technology amazed people with its full range of 3D stereoscopic sound effects, which led to the development of world of warcraft, x-men apocalypse and, most recently, the avengers series.

Next, let's talk about the actual test of 207 versus 108. Last year, egged on by a friend, I stayed up late to grab a yamaha yas-108, with a palpitating heart and trembling hands. Unexpectedly some time ago, the friend said, he bought a yamaha echo wall, the difference is that the model is yas-207. This stimulated my curiosity. Let him express to my home first, let him and I jointly test the difference between two echo wall.

The first thing I picked out was a 1986 classic, Top Gun, to get a real feel for how DtsVirtual:X expanded the stereo into a 3D virtual surround.

Let's use yas-108 as the test object. 13 seconds into the movie. The moment the bell rang, the background electronic music gradually pushed in, did not affect the lingering sound of the bell, in 1:04 seconds, the aircraft carrier wind and f-14 tomcat aircraft engines gradually joined. But the sense of position of the engine's gradual glide is still clear. The sound of the command broadcast echoed overhead. At 1:58 seconds, when the deflector rose at close range, the sound of the metal lock was unusually clear, as if it was close at hand. 3:48 seconds with the background music gradually surging, the f-14 tail flame on the screen began to shoot, you can clearly feel the reverse impact of the airframe taking off from the deck, and take off from left to right through the air, like directly flying overhead, there is a sense of renal hormone surge speed. Ok, so we're going to keep this feeling, and switch to 207 in real time to make sure that auditory memory isn't affected.

We will direct switching HDMI interface, audio output switch to 207, continue to "top gun" section, followed by Tom cruise driving F - 14 air combat mig - 28, as is known to all, air combat fragment is the most can reflect dimensional move, as well as the speed of sound, but to my disappointment, originally this paragraph should be very passion of air combat, narrow cabin pilot rapid breathing, as well as outside the cabin long-distance travel are tending to the doctrine of the mean, no significant position in contrast to feeling makes tension falling sharply. Bass sinking is also slightly inadequate, the same is DtsVirtual:X technology, how the difference is so big. Is it not the same clip? So let's go back to the beginning of the movie and relive the same scene, the same time scale. But still feel the texture of the space, was greatly compressed. It seems that there is still a gap between the original resolution and the sound field positioning of yas-108. The innate technology always has an advantage over the upgraded one.

Because I think the echo wall is used to watch TV most of the time, so I used the bluetooth connection alone and played mobile app music directly. Under the condition of the same audio source, 108 original bluetooth version reached 5.0, which can be connected to two phones at the same time, while 207 can only be used for one. Of course we're going to talk about sound quality here, bluetooth aside. First selected the new version of hui wei HIVI auditioning disc "dust drum", 108 performance, feel the intensity of the drum sound can be fully reflected. The bass stops immediately without delay. Low frequency is clean. In the case of 207, the bass effect may be due to wireless reasons or other structural reasons, which makes me feel a little sluggish. However, from the perspective of music, two echo walls can still be used as home background music. The sound quality is adequate for the average music lover.

As an entry-level yamaha echo wall, the yas-207 is still a good performance, after all, the current price is attractive. From the perspective of movie-watching, DtsVirtual:X technology is also used for blessing, and the actual effect yas-108 has innate advantages, the decoding algorithm is more accurate, the region is perfect, and the scene is real. At the same time, it has the characteristic of its own inverted sound hole, so that the sound field can be visualized. However, 207 May have more stringent requirements on film source in terms of structure or decoding algorithm. Only when the corresponding film source is available can the potential of film source be activated.
You must log in or register to reply here.