With the next generation of consoles due to be launched later this year (as planned), intelligence is also emerging about the two new consoles. In the case of Xbox X, Microsoft appears to be planning to release more important details in the near future. 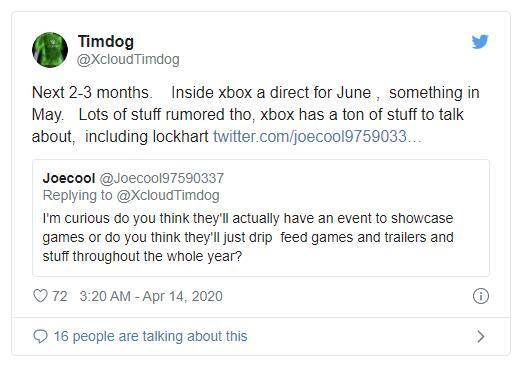 Timdog, a well-known Xbox intelligence whistleblower, recently tweeted about Microsoft's plans, saying that Xbox X would be officially released in the next 2-3 months. According to him, the Inside Xbox showcase took place in June, but before then, another digital event will take place as early as may. Timdog says Microsoft will have a lot to announce -- including the long-rumored Lockhart, which is believed to be a lower-priced model in the Xbox X family.

Given that Microsoft had big plans for E3 2020, which has now been announced to be canceled, and that Microsoft will hold its own digital show instead, the June event is a natural. But the digital event in May was the first to reveal that, while not to expect too much before the official announcement, Microsoft may well want to stagger the information release peak and prolong the heat. Anyway, we'll keep you updated, so stay tuned.
You must log in or register to reply here.

B
Apple Watch S7 Clone on sale, with a rectangular bezel