Tackling the subject of fulfillment in marriage is a difficult subject, especially when the story is told in the context of the socially repressive 1950’s. April (Kate Winslet) and Frank (Leonardo DiCaprio) Wheeler bring a strong and passionate representation to a couple struggling to find their own future in the suburbs of Connecticut. Unfortunately, there is little insight into the foundation of their relationship beyond a superficial desire to live a carefree life.

April and Frank meet at a party, tell stories to one another about what they want in their lives when they grow up, and then seek to translate their passion for one another into a life-long commitment. Seven years later, they are living in the suburbs, have two children, and Frank is commuting everyday into New York to a job he hates. 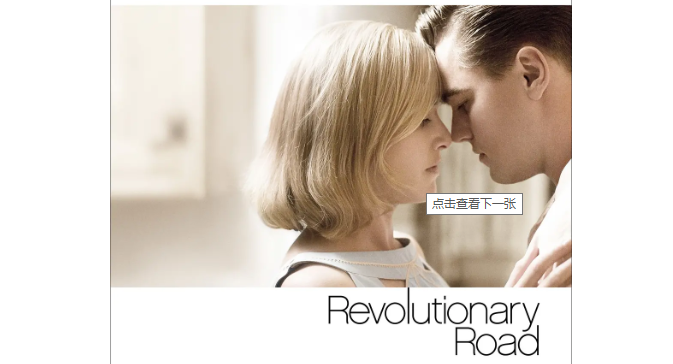 The “seven year itch” has now infected both partners in this disintegrating union. Both have affairs, and both try to recreate their initial passion by fantasizing about moving to Paris and living the idyllic life. Although Frank is not happy with his situation, he is committed to being financially responsible to his family. April is having the harder time adjusting to being the suburban mom, and ultimately her dissatisfaction leads to emotional depression and desperation.

There is nothing new about this story. Every person in any kind of relationship can relate to the fact that the initial infatuation and passion that attracts people to one another eventually turns into daily choices and hard work. Many people will choose a path of quiet dissatisfaction, but in almost all cases, you have to ultimately ask the other person if you really still love one another – or if you ever really loved one another?

The core dilemma of values in “Revolutionary Road” is the same one faced by all of us: Can you survive in a relationship if “self” is the center of your interest? Obviously, everyone needs to be fulfilled in their life, but the question is one of priority. If two people seek to assure that the other is fulfilled, then both have a chance of contentment brimming over the top. If any one person in a relationship seeks their own fulfillment as a first priority, then there is always going to be an imbalance of satisfaction that waxes and wanes throughout the years.

One path that rarely leads to satisfaction is to try to strengthen your relationship based upon past fantasies. Dreams are strong motivators, but ultimately there has to be an underpinning of values that brings clarity and direction to the path you take. Here is where Frank and April are left in an abyss. Neither chooses to surround themselves with people of substantive values or good role models of love, commitment, or good communication. Even in the socially repressive 1950’s, there were thousands of people spread throughout the culture who sought to deeper their relationships in churches and other institutions committed seeking to love deeply. Frank and April chose a path of isolation that ultimately proved to be fatal to their marital survival.

It would seem obvious that the toll taken on the Wheeler family would end up being multi-generational. What did Frank and April learn from their parents? What are they teaching their children about love?

Unfortunately, we see little of this impact in the story, leaving the viewer to only focus on the fleeting happiness of Frank and April. That is an all too common outcome of a marriage based on the superficial values of our present day. Without deeper roots, there is little chance that the tree will blossom.

Good film, food memory for not only Jack and Rose but also for us audience
You must log in or register to reply here.