The Fire TV Cube is Amazon’s attempt to combine a smart TV streaming box with an Alexa-powered smart speaker, producing a small black box that doubles as an Echo device. 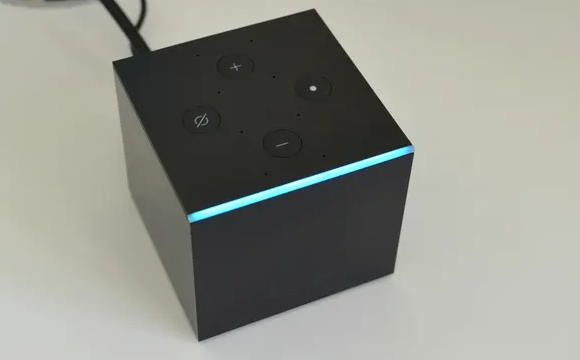 The Cube doesn’t look like anything else. The combination of shiny and matt black plastic makes it stand out at first, but the 86mm-wide and 77mm-tall cube is small enough not to be distracting sitting next to your TV.

It’s essentially a voice-controlled Echo Dot mated with a Fire TV smart television box. The top resembles an Echo Dot with the same four-way configuration of buttons for volume, muting the microphones and an action button, plus a series of holes for the eight beam-forming mics.

A light strip at the top front edge shows what Alexa is doing, lighting up blue when listening, or orange with alerts. Ports are in the back for power, HDMI for your TV (cable sold separately), an optional infrared blaster and a microUSB socket, into which you can plug the included ethernet adapter if you don’t want to use wifi to connect to the internet.

While the Cube looks neat, the tangle of cables coming out the back doesn’t, which is a shame as it has to sit out in the open to work properly as a smart speaker and to control your other devices.

Also included in the box is Amazon’s latest Alexa voice remote that ships with most Fire TV products, including the £50 Fire TV Stick 4K. It’s a simple, easy to use remote, which includes a much-welcome dedicated power button, a microphone button for talking straight into it for Alexa, plus dedicated play and volume buttons. 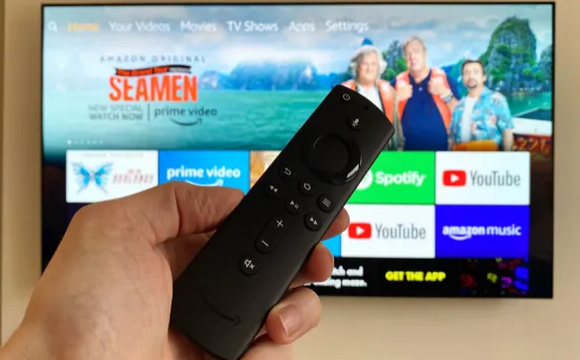 ​
The Cube excels as a smart TV box. The interface is fast and responsive. The home screen is fairly simple, with much of the recommended content from the likes of Prime Video, Netflix and others accessible straight from carousels in the main interface.

Advertisement
Dedicated media apps take care of the rest with most mainstream services in the UK supported, including All4, Apple TV (iTunes etc), BBC iPlayer, BBC Sport, ITV Hub, My5, Netflix and YouTube, through which you can also access Google Play Movies. The only notable exception is BT Sport, which may be a deal-breaker for some.

The Cube supports high-end video and audio formats that are becoming increasingly popular as part of streaming services too. On the video front you have up to 4K at 60Hz, HDR10 and HDR10+, HLG and Dolby Vision, meaning that essentially every mainstream HDR format is covered. On the audio side you have your standard stereo, 5.1 or 7.1 surround sound, but you also have Dolby’s Atmos format, again covering practically every base. Both Dolby Vision and Atmos are supported by Apple TV, Netflix and Prime Video.

Of course your equipment also has to support these standards to use them, but attached to an LG OLED and Denon receiver, Jack Ryan in Dolby Vision and Atmos on Prime Video looked and sounded fantastic.

What was that, Alexa? 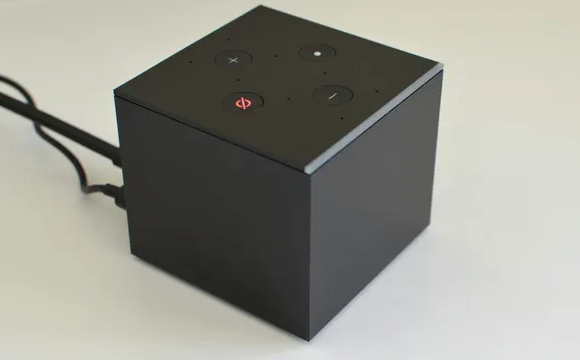 ​
As a smart speaker the Cube can’t quite match up to Amazon’s cheapest Echo devices. While it can hear you just fine, Alexa’s speech is output from the box with annoying variations in volume. It starts very quiet before returning to normal volume each time Alexa starts to speak, so you often miss what is being said. It is seriously irritating.

You can control basic things such as playback, volume and navigation in most apps. But Netflix, Prime Video and YouTube support deeper voice control, including the ability to simply request a show or movie.

Alexa can also turn things on and off, such as your TV. The Cube uses both the HDMI control and IR blasters to remote control your various entertainment devices, alongside Alexa’s smart home integration for lights and other bits.

Setting it all up was a little long-winded but fairly straightforward. Getting the TV and a Denon receiver to switch on for the Cube was easy. Adding the Sky Q and Virgin V6 boxes was a bit more laborious, requiring the additional IR blaster and pressing buttons when Alexa says so.

Once working you can changing the channel up and down, control the volume and even “tune to BBC One”. Beyond that things get a bit hit and miss. Ask it to pause or play and Alexa says “your provider couldn’t do that”, but it can fast forward and rewind. It also failed to turn off the satellite box when turning everything else off, and routinely failed to turn on the TV or the Sky Q box when commanded.

The novelty of voice control quickly turned to annoyance. I switched back to reaching for the remote for reliable control. In its current state I don’t think it’s worth persevering with.

Some of these issues will be due to the manufacturer of the box you’re trying to control, but given Logitech’s long-standing Harmony smart remote can reliably replicate practically every function of common devices, Amazon should be able to do better.

All of these playback controls and Alexa functions can be done through the voice remote too. Hold the button, talk to Alexa and it will either answer through the Cube’s speakers or your TV if on – no Alexa wake word required.

The Amazon Fire TV Cube is an excellent smart TV box, supporting a wide selection of apps and services, video and audio standards and with snappy, lag-free performance. It is arguably one of the best smart TV boxes available.

But it is not a good smart speaker. Irritating volume fluctuations and a decidedly average speaker make it worse than a separate Echo Dot. The home entertainment equipment control is likewise poor. It works fine enough for turning on your TV for the Fire TV interface, but is inconsistent for other devices and can’t replicate enough functionality via voice that you don’t need to routinely reach for the original remote. It’s irritating more than it is useful once the novelty has worn off.

That’s not to say Alexa doesn’t work very well at controlling the Fire TV interface, playback of shows by name and quickly jumping to a particular point in a movie. But you can do that just fine using the mic button on the remote – the same remote and capability you get with the Fire TV Stick 4K which costs less than half the price.

The Fire TV Cube is still significantly cheaper than most of the competition, but if you want the combo of an Amazon smart TV box and an Alexa smart speaker, buy the Fire TV Stick 4K with an Echo Dot and save £10 or more.

Actually we should focus on the performance of a TV box. I think speaker is not that important because we are not viewing a professional speaker. At least its price is reasonable, we cannot always be that strict.
You must log in or register to reply here.