"Dreams" players were "reported" by Nintendo for creating Mario

The PS4 game "Dreams" has recently received a lot of attention. Many players call it “not like a game", because this game relies on the player's creativity to create different themes. It is a game-based game. Player community platform, some people call it "Mario Mario" on PS4. Although in theory players can create any content, sometimes they will "step on the thunder".The creator of Dreams, @Piece_of_Craft, tweeted that his Mario project would be suspended with the intervention of a large video game company.According to subsequent add that he received a message from SIE European legal and commercial sectors, the message told the name of the creator: Nintendo against his use of copyright "horsepower Austrian" in "Dreams" in. 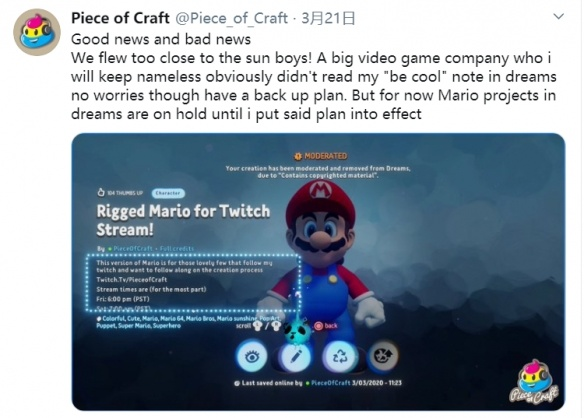 ​
In this regard, game developer Media Molecule said that recreating their favorite games is a good way to familiarize themselves with tools and learn to create, but if you use other people's copyright-related content, be prepared for the work to disappear at any time.

not happy with that. Isn't recreating the character a basic way in the game world?
You must log in or register to reply here.