Pokémon Unite is a 5v5 multiplayer online battle game. It will be released for Nintendo Switch on July 21, 2021 and for Android and iOS on September 22 of the same year, and can be played online across multiple platforms.

On October 4, 2012, Pokémon Unite announced on Twitter that the cumulative number of downloads for Switch and mobile had exceeded 25 million.

Sensor Tower store intelligence data shows that the game topped the global mobile game download charts in September with 33 million downloads. The U.S. was the top market for the game, contributing 21.8% of the downloads, followed by Brazil at 12%.

The other 4 games in the top 5 are Voodoo "Destiny Run", Garena "Free Fire", Sybo Games "Subway Surfers", and Tencent "PUBG Mobile" (combined with "Peace Elite" downloads) in that order. 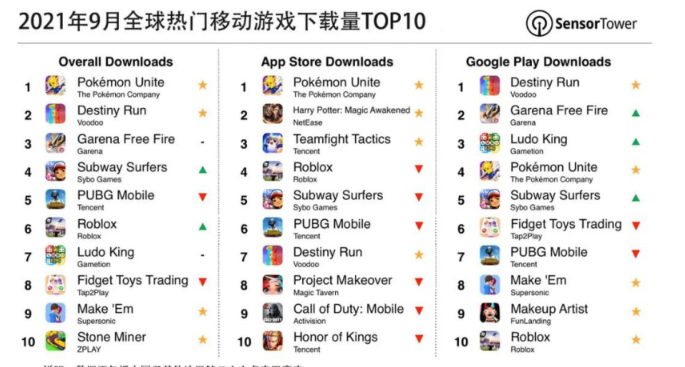 In September 2021, there were 4.2 billion downloads of handheld games worldwide on the App Store and Google Play, down 4.3% year-on-year. India ranked No. 1 with 746 million downloads, accounting for 17.7% of total global downloads. The U.S. market ranked No. 2 with 8.3% of downloads, followed by Brazil at 8.2%.

In September, Chinese handheld game publishers dominated the App Store handheld game download list, with the top three games "Pokémon Rally", "Harry Potter: Magic Awakened" and "The Battle of the Golden Shovel" all coming from Tencent and NetEase.
You must log in or register to reply here.