Avengers 5 is Coming? Are there any new characters in Avengers 5?

Avengers 5 is Coming? What is the Avengers 5's story about? As Avengers: Endgame marked the conclusion to both Phase 3 and the entire Infinity Saga. As high-stakes, super-scale crossover movies go, it’s hard to top. For that reason, Phase 4 will be the first of the MCU not to feature a big team-up film. However, Marvel has never ruled out more being made in the future. And sure enough, it looks a lot like Kevin Feige has cryptically confirmed that Avengers 5 will arrive eventually in his latest tweet.

First, Twitter user Scott Gustin shared a video of the audience being blown away by Cap picking up Thor’s hammer during an opening night screening of Endgame. The tweet went viral, and caught the attention of the Marvel Studios chief. Kevin then retweeted the video, adding his own eyebrow-raising message. “A nice reminder of what we were all doing together almost exactly 1 year ago. A nice reminder of what we will all be doing together someday again.” 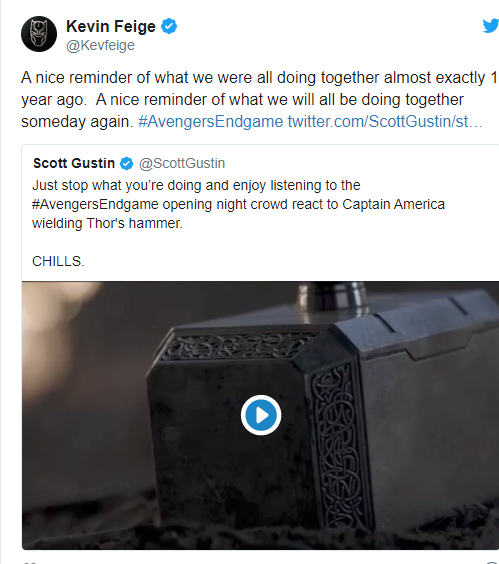 As well as everything else, Endgame also acted as a final adventure for the OG Avengers team, with half of them written out for good. The team line-up would be very different in Avengers 5, then. And Marvel is likely already working on filling out their ranks over the next few movies. After all, major new heroes are being introduced across the franchise, from She-Hulk in her own Disney Plus TV show to Mahershala Ali’s Blade.

As per We Got This Covered’s own intel, Avengers 5 will likely go by the title New Avengers. The second-generation heroes, such as Doctor Strange, Sam Wilson’s Captain America and probably Spider-Man will now be the senior members. Brie Larson’s Captain Marvel, meanwhile, is going to serve as team leader, according to what we’re hearing. And when it comes to their latest nemesis, Kang the Conqueror has to be the odds-on favorite.

The earliest Avengers 5 could get here is 2023. It’s a while away yet, then, but Earth’s Mightiest Heroes will return, as Feige says, “someday.”

The reality of all this is that we will be seeing a new team of Avengers and the hope, the big hope, is that if the MCU is going to push anything, it will be that the Avengers will have more female members, which is all well and good since there are some seriously powerful women in the MCU, and that they’ll be taking on cosmic-level threats from that point on since anything like Ultron or lower would likely be a bad idea if the MCU is still intent on making Carol Danvers the most powerful character in the MCU. Of course there are still more heroes to add, and some that are far more powerful than Carol without any question. Maybe saying she’s the most powerful Avenger, or the most powerful earth-born hero would be better, since if the Silver Surfer or Galactus shows up and she waxes them both with ease then fans are likely going to call bs in a hurry. It might be time to dial back on her power level a bit and remember that her character isn’t the be-all, end-all of heroes.
You must log in or register to reply here.