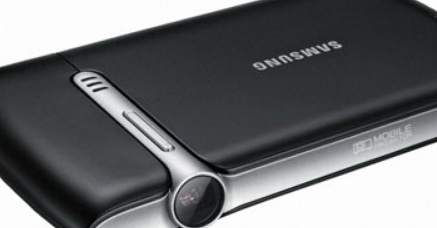 The projector looks like a phone, but is smaller than the standard Galaxy S III. But there is no difference in design because it looks like a mobile phone with a projector lens on one side.

The only requirement for the device is that it should have an HDMI port and compatibility, and that it will be detected automatically when connected to the device.

The sad thing about the mobile beam projector is that only north koreans can buy and make the most of it. So far, there is no information on whether international buyers will be able to buy.

The Mobile Beam projector will have a 1650 mAh battery, enough to project the screen for about two hours when the brightness level is 20 lumens and the content is displayed at nHd resolution of 640 x 360 pixels.

It measures 116mm x 60.4mm x 12.2mm and has sockets for HDMI input and output, with a five-point charging socket on one side and a projector lens on the other. The speaker also comes with a small speaker, as well as a focus control button and status indicator.

The projection lens of the beam projector is located on the side plate, and the other side has a power key and various sockets and charging points. Simple and slim projectors can be connected to smart devices, such as tablets or even PCS, and can be easily identified automatically after connecting.
B